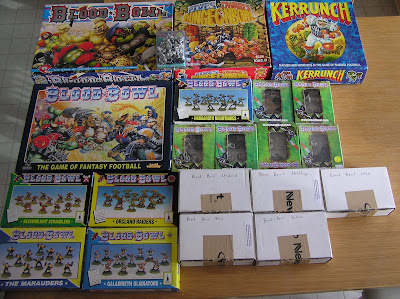 With the Superbowl and Exponent Wargames excellent pitch making article, I thought I would also do a couple of blood bowl related posts. As you can see from the picture, I have a good deal of blood bowl stuff. It was actually my first GW game. I started playing in the late 80's with the second edition. It was a fun game but a little slow. Unlike the current version of the game, every player could move around 4 squares and throw a block. There were also really no turnovers so the turns all took about twice as long as now. You were also supposed to play til one team scored 3 points. When 3rd edition came out, GW raised the price of the teams significantly (lead to pewter transition probably) and reduced the number of players. This was an annoyance which coupled to the fact that most of my gaming time was with a group of 4-5 other teenagers, a two person game just did not work that well.

I waited about 15 years before picking it up again when I moved to a new city which happened to be starting a league at the local game store. They had teams on sale and I got the starter box on clearence at another store. I narrowly managed to win the league and I started picking up teams on ebay. I got my old stuff out of storage and now have amassed what I think are 27 playable teams. They are not all unique, none are completely painted and I do not have all the teams. I have 4 ork teams(2nd starter plastic, 2nd lead, 3rd starter plastic, 3rd metal) but no amazon, chaos dwarf, orge, or vampire teams.

I always liked the sense of humor and over the top nature of blood bowl. Here is my favorite mini from my collection. A 2nd edition snotling taking care of some business in someones helmet. Very juvenile I know. 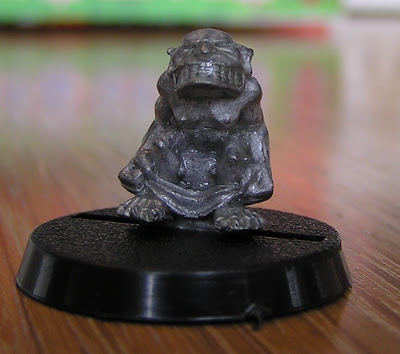