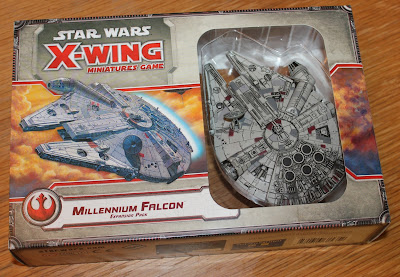 I picked up the Millennium Falcon for the X-wing Miniatures Game.  This ships is generally readily available as most players are not trying to field squadrons of them compared to some of the smaller starfighters.  It is listed at 30 dollars so twice as expensive as the starfighters but it seems a better value as it seems more than twice as big.  GW wants 30 dollars for the new plastic space marine captain so this is far better value. 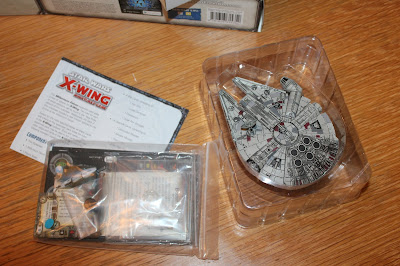 For your 30 dollars you get the painted and assembled ship, a little rules supplement, and a pack with the bases, counters, and such. 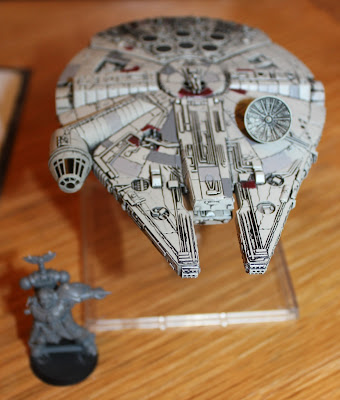 Here I have the model on its stand with a our classic marine scale comparison.  The cockpit is about the size of space marines head. 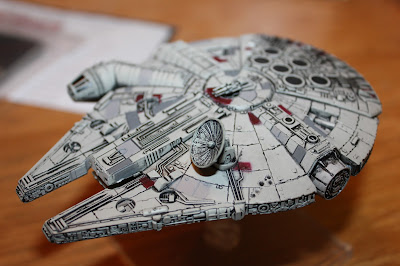 Some pictures of the details and painting.  All pretty good.  I am a little concerned about knocking off the sensor dish. 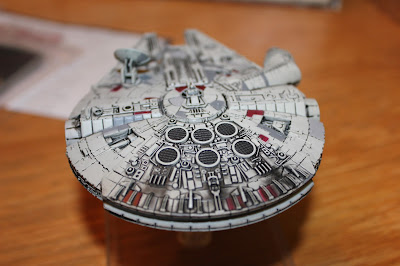 You can see the carbon scoring near the vents so clearly not right off the factory floor. 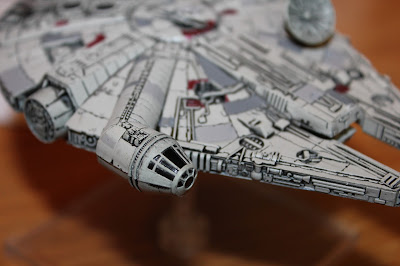 The cockpit has a slight gloss to it. 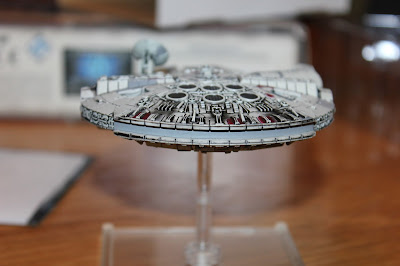 The engine painting is pretty weak.  Needs a much brighter blue. 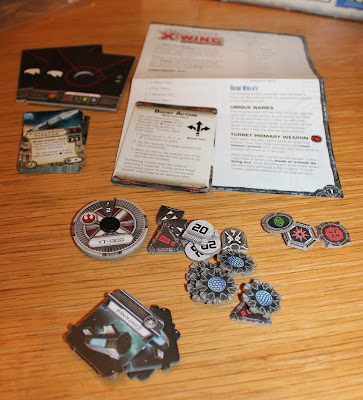 You get the standard counters, cards, and dial.  You also get some mission objectives for a new mission listed in the rules supplement sheet.  The rule sheet has a new action Boost on it.  I do not have enough experience yet to give a "is this a good ship review" or what options you should take so I have many focused on the box contents. 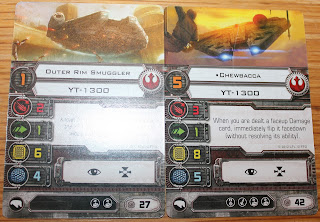 One of the interesting thing about the Millennium Falcon set is that unlike many of the other ships the pilot chosen changes the Stat line beyond just the Pilot Skill.  They have the generic YT-1300 and then they have the unique characters who have both more firepower and better hull and shield values.  The basic YT-1300 does not seem like a bad ship at 27 points and plenty of people have discussed how falcon is a very forgiving ship with its turret weapon.  It certainly does not dodge well or have a ton of firepower but you can pretty much fly right into the center or the fray and move erratically and still be shooting it people maybe when they cannot shoot back. Getting is close without the concern for fire arc can bring that base 2 attack up to 3 when you are at range 1.

I am going to give the game a go with my daughter using the basic rules with 2 Tie fighters vs her in the YT1300 this weekend.  We will see how it goes and whether she can handle the basic rules of movement and shooting. 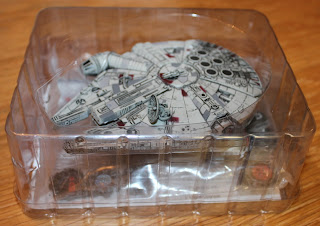 The plastic holder in the box works well for storage and can fit all the counters and such underneath.  That is pretty handy as you really do not need custom foam carrying cases to protect the models.

If you have given the falcon a spin how did she do?
Posted by eriochrome at 9:50 AM