I was a Bad Boy on the Reaper Forum 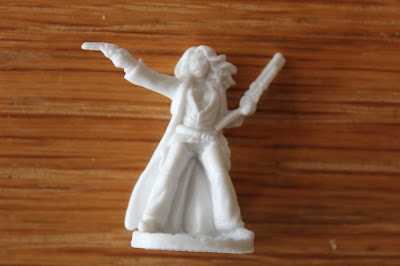 In my quest to get an answers about Reapers plan to make sure all of the model's in the new kickstarter will have noses, I started a new thread on their message board in the Bones section essentially asking the question.  I come back later that day and cannot find it.  I search under my profile and find that my little thread was merged into a massive thread for all discussion on the kickstarter.  It is now hidden in a thread with 175 pages of 20 posts so pretty much an unreadable collection of posts.  This seemed fishy to me as so I left a trolling comment to the moderating thanking them for relocating my post since before people might have been able to find it before.

This was clearly going to far so I got a warning about getting banned by the moderator who said she was only following through on her goal of collecting all the kickstarter threads into one and has no control if Reaper wants to respond to my questions.  I was wrong to automatically assume nefarious intentions but I do not think that pushing all the threads about the kickstarter into one unreadable thread is a really good idea either.  There are plenty of different topic paths there that people would want to read separately instead of fishing through a 3000 post list.  It should probably be its own subforum purely for the reaper kickstarter with thread like how much you are pledging for which models, discussion of model selection, shipping and customs, etc.

I am not even that down on the Reaper Bones models but I note that the second kickstarter still has a ton of face characters in it where the first kiststarter had its weaker models.  We are very sensitive to the appearence of humanoid faces so they are the toughest to get right for the models.
Posted by eriochrome at 9:13 AM