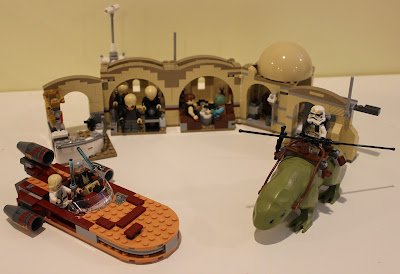 My Lego collection has grown quite a bit since I started to get them again about 5 years ago.  Now Lego releases about 12 or so Star Wars sets a year and with very limited source material they end up repeating sets over and over again.  After my 5 years, I have done a pretty good job filling in my collection with sets that fit my interest and have now gotten to the point where 1 or 2 of the sets really interest me.  Now they do a good job of always having new and better minifigures but I just cannot afford to go chasing after those.

The Mos Eisley Cantina was a set that I knew I wanted as soon as I saw it.  You get a  multi-alcove cantina, Luke's Speeder (which I did not have), and a Dewback.  All good.

The minifigures are Greedo, Han, Sandtrooper, Luke, Old Ben, and three Bith musicians who are icon to the scene but I miss a Dr. Evazan and Pondo Baba to get the into the fight with Ben.  You also do not get a bar keep.  Now I have a hard time splitting up minifigures from their initial design but maybe I will have to see what I can find to add some patrons.  All the figures continue the trend of more printing and more customer head pieces.

Only Han and Luke get two faces. 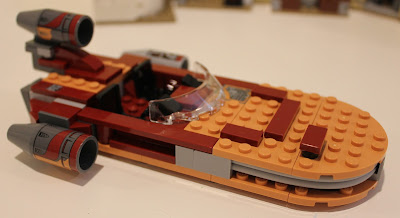 The main let down on the speeder is the stickers as opposed to printed pieces.  Printed pieces are becoming very rare for non minifigures in recent sets which is a let down.  I am never able to get the stickers just right. 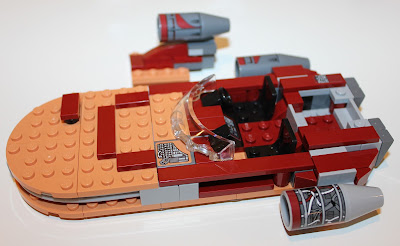 Small storage in the back area.  Landspeeders are pretty common for people but the last one was a Walmart Exclusive and I do not really shop there so never managed to get one. 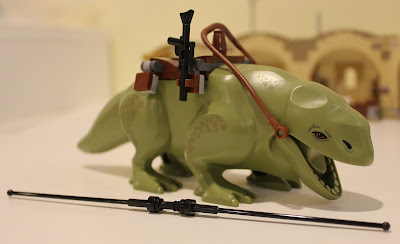 The dewback can be set up with saddle or bare back.  He is not brick built and can only move his mouth but I still think it is a great addition. 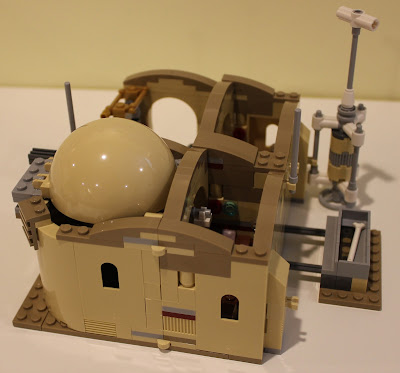 The Catina folds up pretty small which reminds you that the set is not very brick heavy. 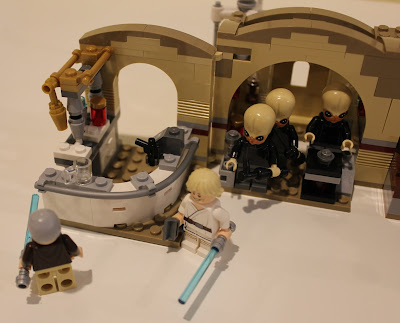 Small Bar area with the strange overhanging pipes and such. 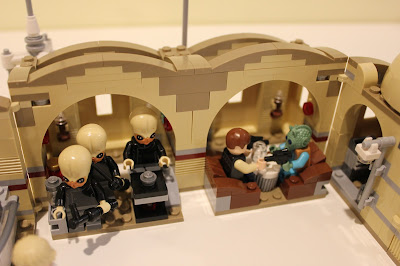 The band and table alcoves slide in and out using the feed bin in the back.  Obviously they are two small to get 4 minifigures into so that we can learn how long the Kissel Run is. 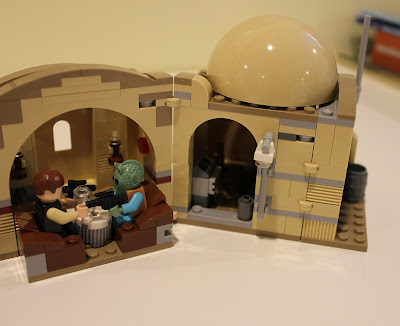 The last are is the entrance with Droid scanner 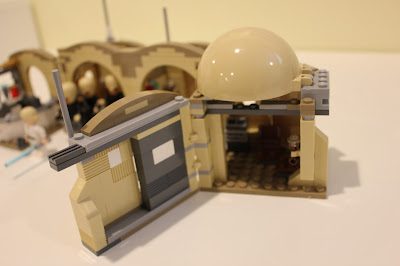 You can swing open the door frame and it also slides open.

While the Catina is small it is pretty representative of the scene and the best you get from Lego for this stuff unless they put it to real scale and a 200 dollar price point.  Lego wanted like 70 for this set but I think I paid something in the 50's which seems more reasonable due to the combination of things in the set.
Posted by eriochrome at 8:21 AM