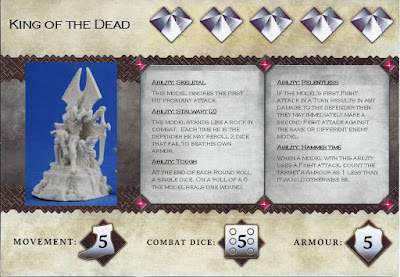 Once the mightiest King in the lands of Mantica, this lord would not let death separate him from his power.  Now he controls a horde of undead creeping across the land but if it comes to it he truly is a terror on his own in combat. The King of the Dead is extremely tough to wound and will probably require Epic heroes with an array of skills to beat in combat but not all quests require you to beat the villian.  Sometimes you just have to get past him to be successful.
Posted by eriochrome at 10:37 AM