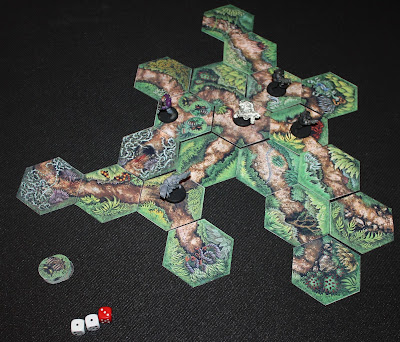 So I gave Lost Patrol a try tonight.  I had heard bad things about the updated rules taking an intentionally unbalanced game and making it almost unwinnable against someone who know how to play the aliens so I went Old School Rules with the Lurker Counters instead.  I was just getting a feeling for the rules and was playing myself before getting the kids involved.  Scouts went 1 for 3 tries which was not bad.  This was after the first turn Scout on the map they won.  Because of all the Y splits right near the clearing I was able to reveal tiles pretty fast, getting 20 tiles after an aggressive first turn push.  On trick for the Scouts is to get just far enough from the clearing to get some of its outgoing paths to clear and then try to retake it to draw new paths out.  Sort of cheap I know, but the Lurker player can counter it by spanning Lurkers in the region when Scouts push out.

Next time I will unpack some stealers to see how the new version plays.
Update:  Tried the new version of the rules.  These are pretty bad.  Pretty much every turn for the scouts is roll 5+ or lose a scout regardless of what you do.  It plays so bad I think I must be playing it wrong but have read the rules and discussions a couple of times.