Here we have the newer Human Blood Bowl Team produced by GW. The copyright stamps on the bottoms say 2004 so they are about a decade old now. Most recently (until April) they were sold for 60 dollars and have 16 team members making them similar in price to the 12 man team for 40 with the 20 dollar 4 man booster that many of the teams were available as during the middle of the last decade.  The team looks pretty good if you like the GW spike motif.  I had not picked up the team before since I did not really play humans much and already had the 2nd ed monopose plastics, the 3rd ed starter plastics, and a 2nd ed partial metal team that I was filling in.  With the end of GW metal production I decided to pick them up since they are pretty interesting looking. 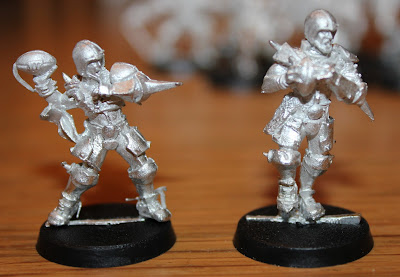 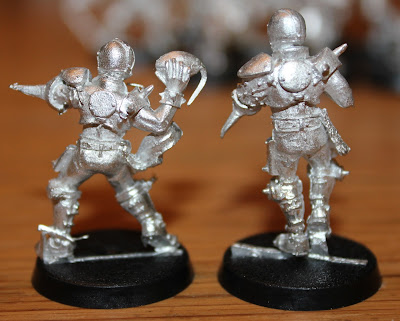 The team comes with 2 throwers. You can see a fair amount of flash and venting. These are new models ordered a few months ago and have not been cleaned up yet.

Here we have the 4 blitzers that come with the team. I am guessing they are the blitzers since they are in a more running pose than the other models. This is the max number you can field and you want to field them all as the team grows to fill the roster so this team was built the rules in mind.

You also get 4 catchers which is also the max allowed in the roster. Not sure if you really want to have 4 catchers due to their weak strength and armor values. Might leave one at home on the shelf to free up a roster spot for a big guy.  Or you can expect 1 of them to be injured every game and fill the roster spot with a star player.

That leaves 6 lineman to fill out the 16 man team. You will notice that all the models are different which is good since most of the modern teams generally top out at 8-10 unique models so you almost always have doubles in the full roster. 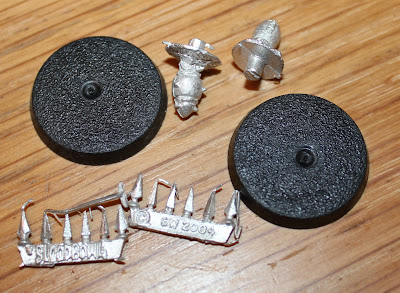 The set also included extra spikes. GW loves the spikes. Not exactly sure if these go on the models or what. They also include 2 metal balls which is nice since people make custom pitches and use alternative block dice so a spare ball is helpful.

Adding in Zug for Completeness as he is more in the style of this team. 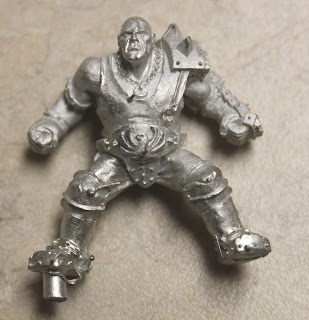 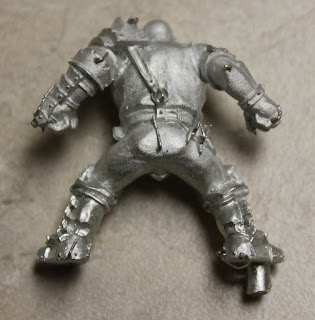 Posted by eriochrome at 9:23 AM