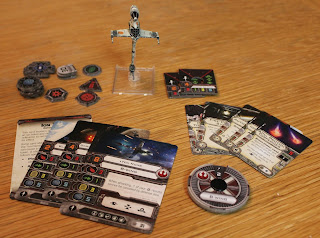 X-wing is an essentially combination of a Miniature Game with a Deck Building Game.  Each ship comes with pilot cards which are only useful for that type of ship but different sources for ships can have different pilots.  The starter set X-wing and Tie Fighters have the same generic but different unique pilots fro the X-wing and Tie Fighter individual blisters.  Each ship also comes with a few upgrade cards which can be used on other ships also based on the types.  You can put droids in both the X and Y wings.  Crew cards can be used on any of the bigger ships plus the Hawk, etc.  Now this is great for FFG bottom line as you might be forced to buy ships you do not really need to get the cards.

This gives a ton of options in list building but what if you do not have the cards you want for your list.  Currently certain ships are hard to find at your FLGS and it can get expensive to buy a 15-30 dollar ship just for an upgrade card.  For official events the rules say no proxy cards but for friendly play what is the line?  If you did not have a couple of different cards, I am sure that for a fun game I would let you proxy it, but if you want to proxy 3 of a this card and 3 of that card, and 2 of this other card, I might doubt that you are really trying to have a fun game.

This discussion came up recently on another site where someone wrote a list that had 3 15 dollar ships but probably needed 225 dollars worth of ships to get all the cards.  He would have had to buy like 3 of two different 30 dollar sets plus some others of which he only needed 3 of the 12 ships.  Seemed to me that I might let him proxy that once or twice to test the list but after that I would probably be sick of that list.

Did FFG make the card availability what it is to limit certain spamming of card combos?  Everyone wants to have a killer squadron but if your list needs you to over buy certain things that much maybe you are not playing the game as intended.

Update: I found an online squadron builder that has you input what sets you have and limits your selections to those ships and models at: