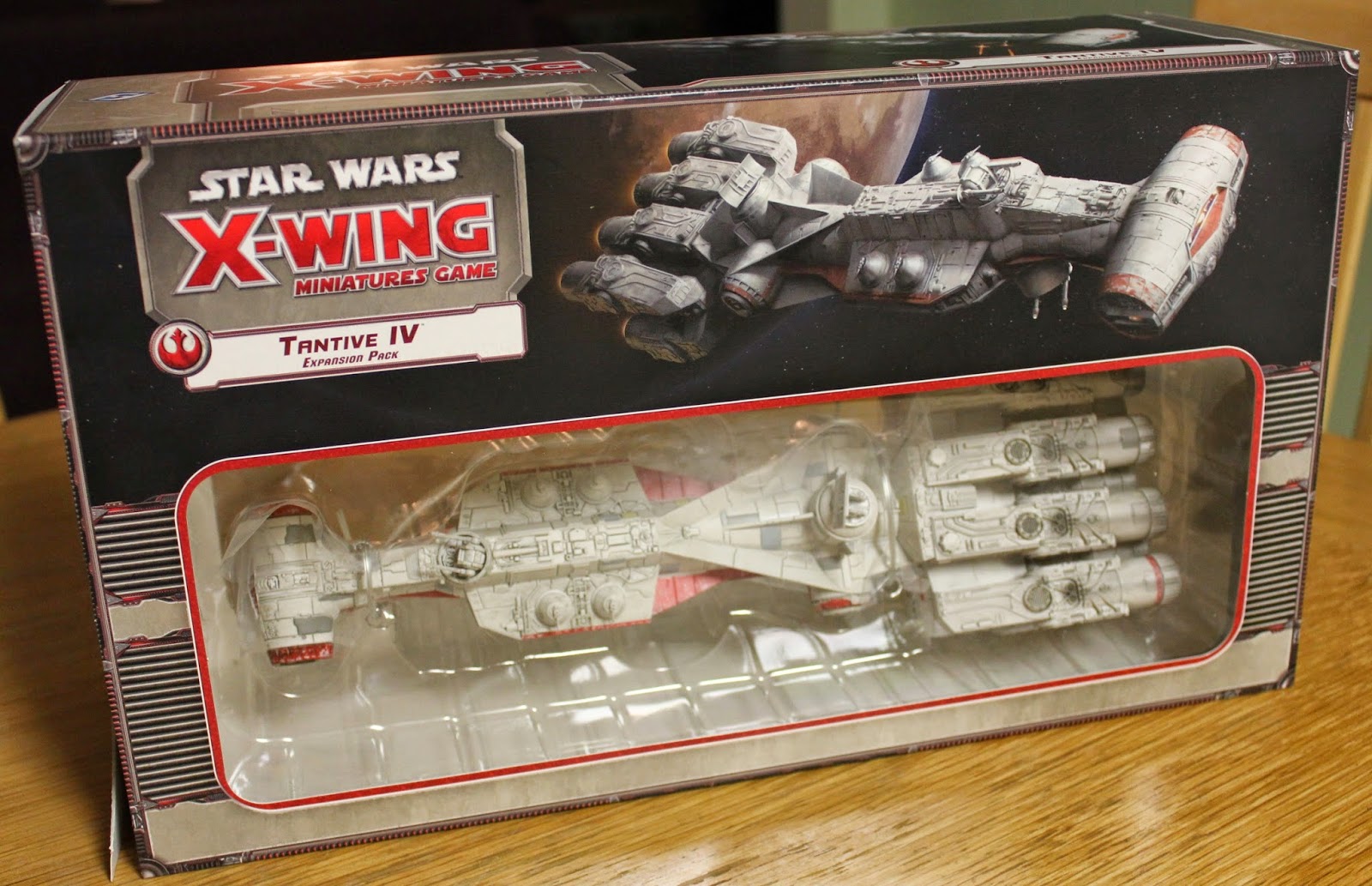 As I noted previously, I got the Tantive IV expansion for the X-Wing Miniatures game for Father's Day from my kids (wife).  There is a lot in this set but that is what you should expect for an 89.99 game expansion.  That cost makes it about the same as a GW Wraithknight or Nid Flying Monsterous creatures.  So lets see what your hard earned money buys you. 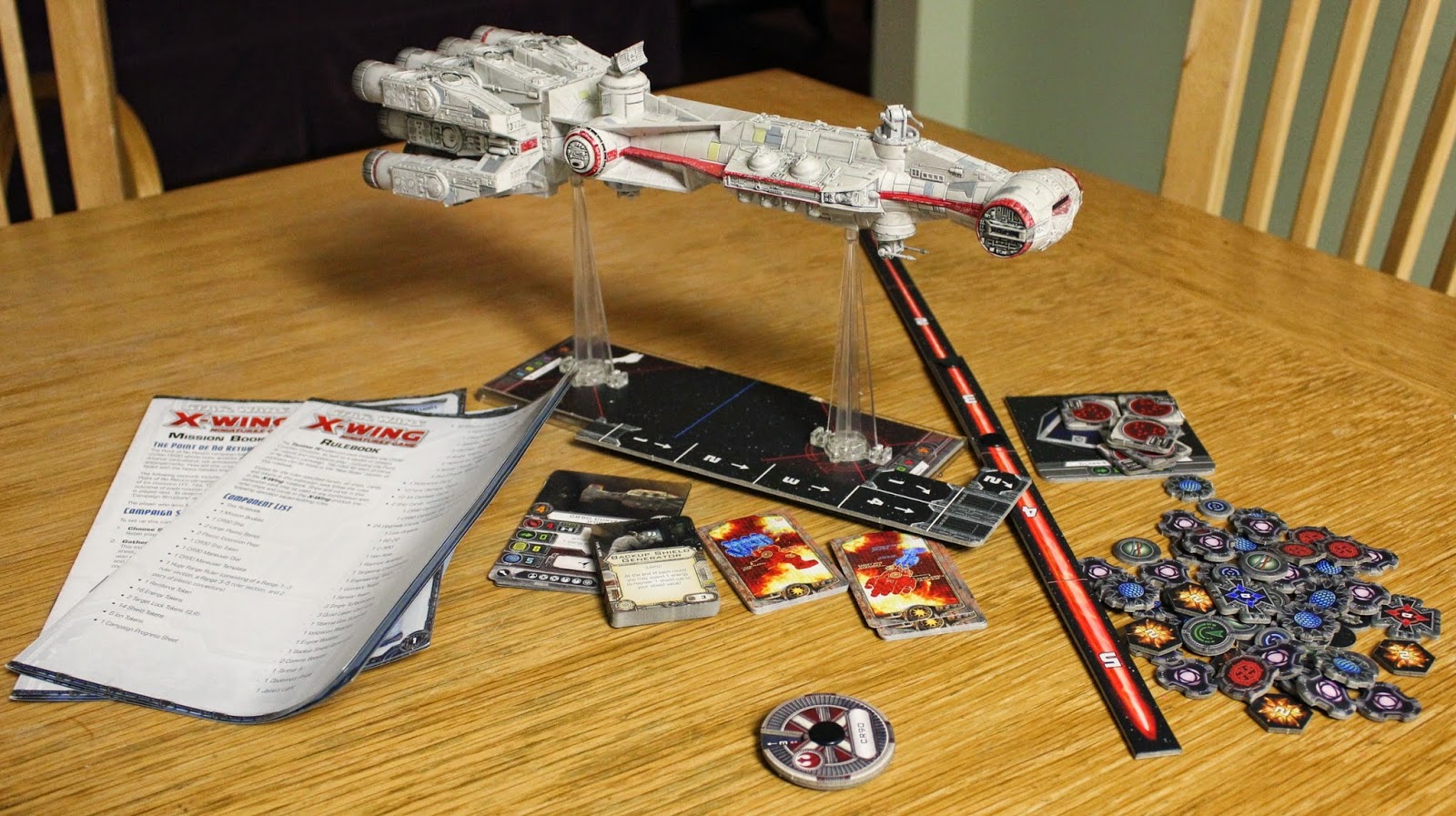 You get the ship, base, assorted tokens, extended range ruler, movement template, dial, two new damage decks, assorted cards, rules, and  a 4 mission long branching campaign.  Not quite the haul of say two 40 dollar starter boxes but not too bad.

The ship measures out to be just over a foot long with gun turrets that sort of rotate as I did not want to force them and break it and the dish on the back will also move up and down.  The first thing I will note is that there will be a lot of broken pins as these get used.  Be very careful when taking the risers off.  I only had mine mounted up once and the rear clear plastic broke off the ship and stay on the riser.  I think that FFG shrunk down the connectors too much here.  Might have to look to use magnets if it breaks again. 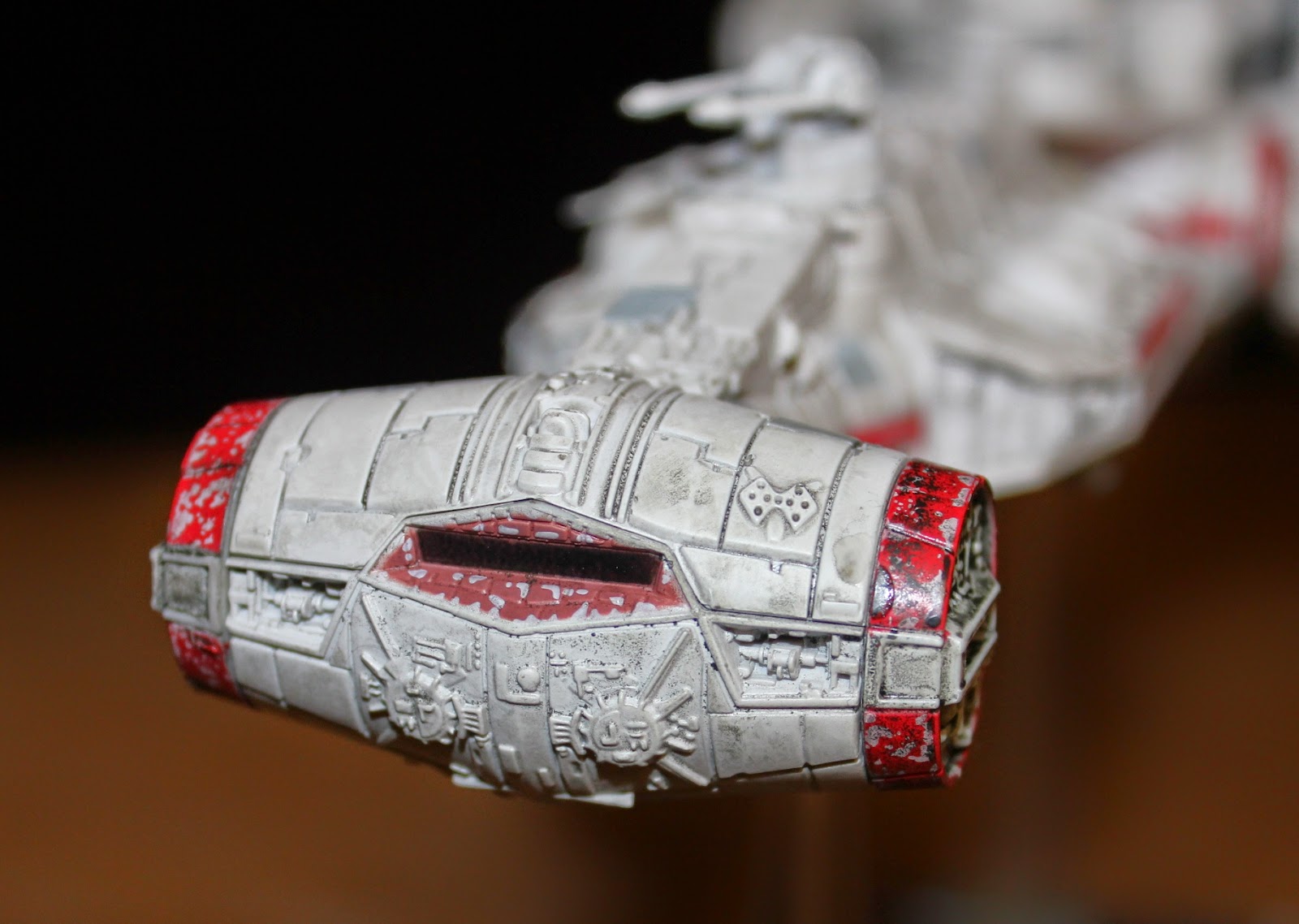 The paint job shows a ship that has gotten a lot of wear but is pretty good.  Probably a little boring but that is just the movie design.

Reasonable details along the ship. 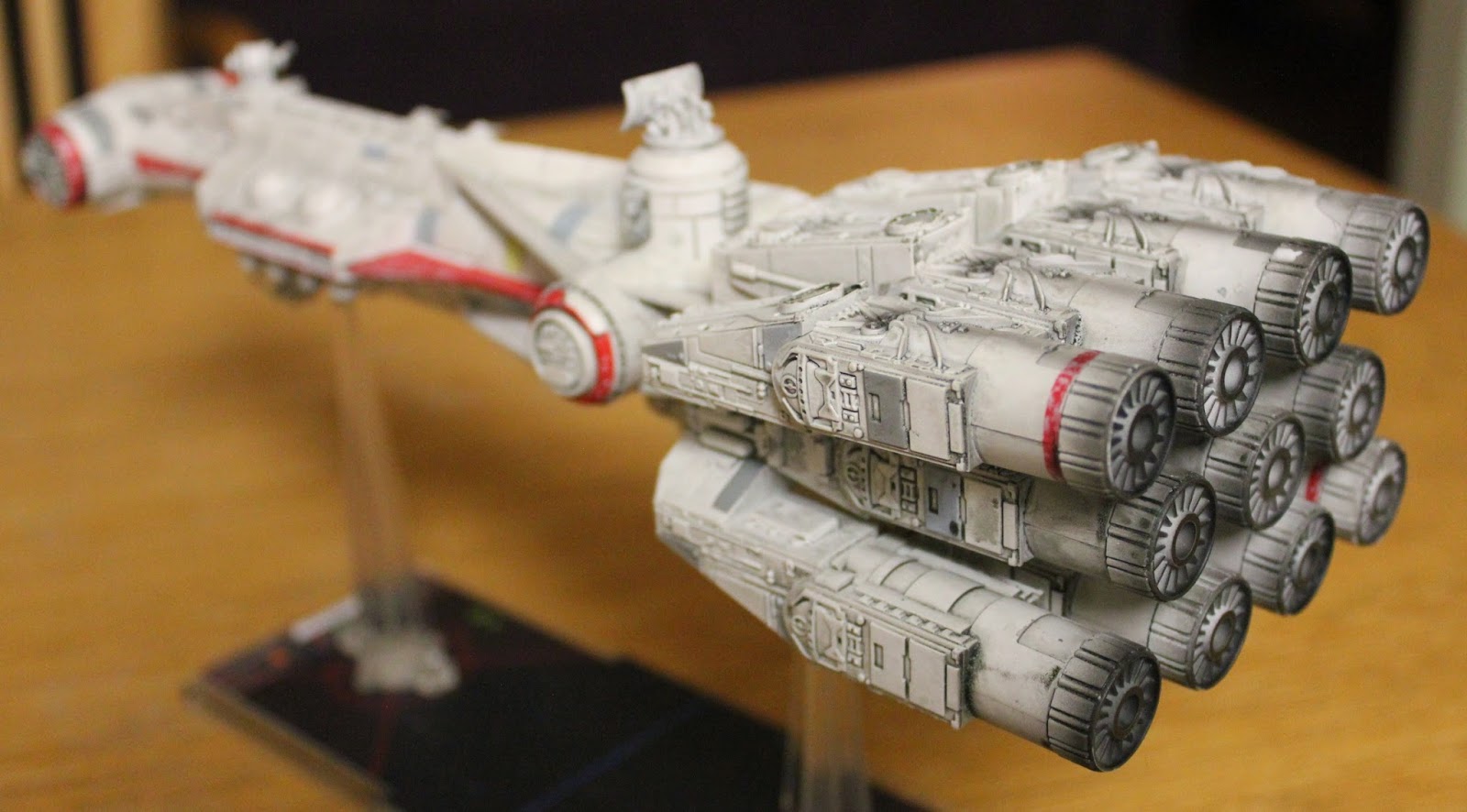 Lots of carbon scoring by the engines. 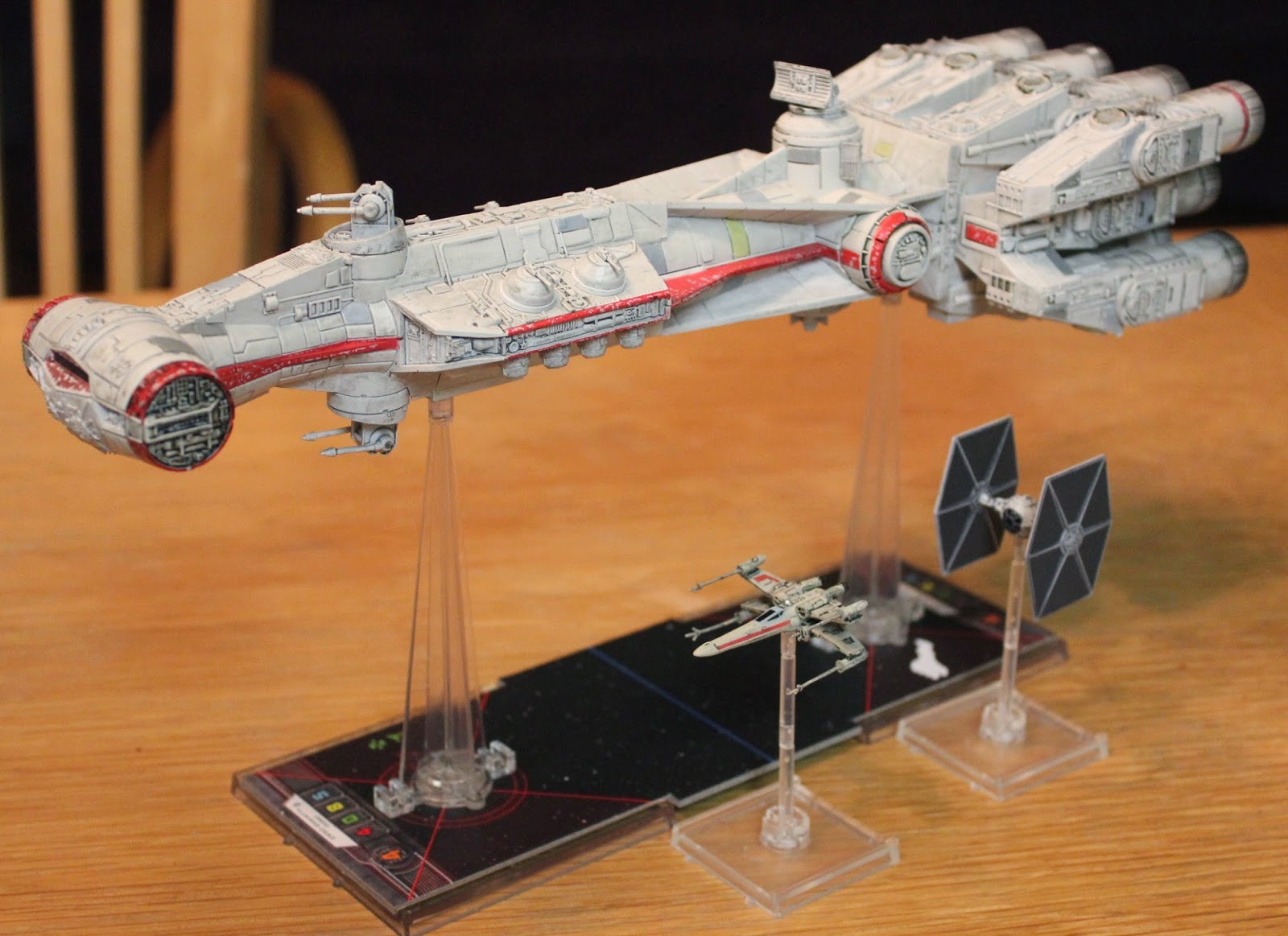 Here is the scale shot next to two fighters.  First note that the model is mounted up much higher essentially at twice the height.  Since collisions are determined by the bases not the models, a normal starfighter can essentially be positioned under the bridge or engine areas without having collided with the huge ship.  In terms of scale the ship is about 60% of the full scale.

Another thing I noticed was that the model was very light.  I expected it to be heavier so it is probably mainly hollow.  Overall the model is nice except for the easy to break off mounting pins.  Next time I will talk about the cards and rules.