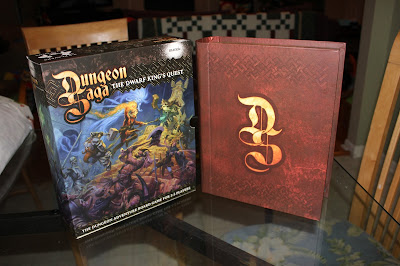 I like many other backers were very interested in the Solo and Pure Co-op version of Dungeon Saga.  I doubt I would have pledged for the product had this not been included.  Now the rules as presented in the Adventurer's Companion are best described as unclear.  Even if you remember that you still need a mission timer for those missions and spend time figuring it out, I still find it sort of unsatisfying.  I seem to be either making decisions that should have better guidance or finding the rules telling me to do things that really stick out as undesirable for the overlord's minions.


So I am going to try to fine tune the rules a little but keeping the overall structure the same.  You use the same cards, the exact same way.  You draw a IO card between hero actions to trigger interrupts, and you draw one card at the start of the overlord turn and replace its suggested number of activations with the mission's, and then a second card to simulate the overlord playing a card.  I have just expanded and adjusted the rules some.Now, for AI what do we need to know.  Which model to activated?  Who will it target for any attacks?  How will it move?

As a general rule models never move in a way to generate a free strike.  Those models are assumed to not be able to get to anyone other than the basing hero for activation determination. This change replaces the Proximity rule for determining threats that is misplaced under the character section in the AC rules.

The threat system will be kept largely unchanged except that I will generally ignore the character level modifier as generally they are either undefined in the core and expansion missions or likely to be very similar that the Threat label from the card will likely be the determining factor.  I will also modify the quest rule slightly ( and repeat the rest) here:

Spellcaster:
Any Hero that has the Spellcaster ability gets a +3 Threat Bonus.

Marksman.
Any Hero that has a Shooting Dice value gets a +3 Threat Bonus.

Unarmoured.
Any Hero with 1 or 2 Armour get a +3 Threat Bonus.

Weakest.
The Hero that currently has the most wounds. There is no modifier if all the Heroes are uninjured. If two or more Heroes tie for most wounds then all have their Threat modified with +3.

Wounded.
Any Hero that has suffered any number of wounds gets a +3 threat modifier.

Armoured:
Any Hero with 4 of 5 Armour get the +3 Threat Bonus.


Quest:
The basics of this rule stay the same.  Heroes with quest specific tasks get the +3 Threat bonus.  I would just add that if the next door the heroes must go through to advance in the adventure (open next zone or finish) is magically warded any spellcaster with Break Ward gets the +3 threat bonus.  If the Door is just locked the Hero with the highest fight dice is considered the Quest threat for the +3 Bonus.

We are going to modify the Orders to make everything at best a little clearer and to remove a few events that I have noticed that cause issues in game play.  This are slightly more in depth than the original rules.

When reading the activation choice section things are evaluated in stages Primary, secondary, and tertiary to figure out which model to activate.  For example the Attack order list attack dice as the primary so a 5 Dice attack model is chosen over a 3 dice model with preference for the same number of dice as Spell, then Shoot, finally Fight.  Now if you had 2 models both with 2 dice Fight attacks then they are tied in primary and you go to secondary which is the highest threat target they can attack.  If one model can attack a model with a threat advantage while the other cannot you would activate the first model and attack the highest threat target possible.  If both could only attack models with the same threat like for example the same model, you would activate the model which has to move farthest to attack using the tertiary condition.  If the distance was the same at that point those models would still be tied for activation.  The final tie breaker for all orders is the model level.

Attack:
The Attack Order is about bringing your highest strength attacks into play on some Hero.  Getting these attacks involved is more important in this order than the threat or the movement.

Target Choice:
Highest Threat that can be attacked by model with its strongest attack.  If tied hero with lowest combat dice is target.

Movement Rules:
Models will move to attack the highest threat available from rear arc if possible then front arc in a way to minimize their own exposure to attacks.

If No Attacks possible remaining commands go to Support.

Gang Up:
The Gang Up order is about attacking the highest hero threats as the driver force for selecting which model to activate.  It is about getting as many attacks onto that highest threat heroes as possible with less concern about how strong the attacks are.

Target Choice:
Highest Threat that can be attack by the model with its strongest attack.  If tied the hero with the fewest defense dice is targeted.

Movement Rules:
Models will move to attack the highest threat available from rear arc if possible then front arc in a way to maximize additional opportunities to attack model.  It does not require moving ranged attack models adjacent to Heroes if that prevents them from using their highest dice value attack.

Pin:
The Pin order is about attacking as many heroes as possible and trying to hold them in place.

Target Choice: Highest Threat Hero that is not already adjacent to enemy.  If still tied attack the hero with the fewest defense dice.

Movement Rules:
Models will move to attack the highest threat hero who is not already adjacent to an enemy keeping themselves between the hero and the next obvious mission goal if possible.  It does not require moving ranged attack models adjacent to Heroes if that prevents them from using their highest dice value attack but they should still move to prevent further progress by that hero as much as possible.

If No Attacks Possible remaining commands go to Surround.

Surround:
The Surround order is about getting models positioned in the way of the heroes to limit their forward progress to their goal in a defensive way and limiting exposure to attacks while not moving adjacent to the heroes. Only models that can be positioned to block quest progress should be activated with this order. Models behind the action should not be used unless the heroes need to go bacl for the quest or there is another path the model can block.

Activation Choice:
Primary: Most detrimental to Heroes progression (Blocking next hallway to Getting Most Arc Squares Path directly in front of heroes)
Secondary: Closest to Highest Threat Hero after movement.
Tertiary: Pile of Bones then Furthest Move to shortest move (No stationary). Models must block the quest progress.

Target Choice: Spells should be most helpful to prevent movement of heroes to defensive upgrade models to add new enemy models then attack spells and Shooting attacks should target the highest threat hero which can be targeted from final position chosen to limit hero progression.  If still tied for who to attack then lowest defense dice hero is target.

Movement Rules:
Models should move to block forward progress primarily then to support each other with overlapping arcs.  If raising a pile of bones gets a model into position to block movement without being adjacent to a hero as well as moving a different model raise the pile of bones as the highest level skeletal minion available.

If  No Models are able to move or raised in a way to block forward movement the remaining commands go to Attack.

Support:
The support order is about getting more bodies into the area of the heroes specifically from enemies trailing the action or from piles of bones.

Target Choice:
Spells which bring in more enemies for the heroes, then ones that help minions, then ones that prevent hero progression, then attack spells.  Shooting models target the highest threat model that they can attack from their final position.  If movement brings model into contact with hero then they fight.  Lowest combat dice is target in tie.

The character concept in the rules is a great idea.  The nature of the model should have some influence on how it behaves in the Invisible Overlord rules.  The issue is that the character across the dungeon is not necessarily uniform.  Brutal models can share the dungeon with cunning or cowardly models.  The main question to answer is do you apply the character while you are trying to select the model (Activation) or only after to help better determine what the model will do (Target).

If an order directs you to activate a model with Brutal it will attack the nearest enemy by the shortest possible route.  If no enemies are in range it will move directly toward the nearest enemy. (Target)

Cowardly:
If an order directs you to activate a model with Cowardly evaluate its targets with the addition of Wounded and Weakest to determine who it considers the highest threat and will attack. (Target)

Cunning:
When determining which model to activate, if Cunning model is involved in comparison of Threats of possible targets add +6 to the threat of the target of this model if they fulfill Quest condition. (Activate, Target)

Warrior:
Standard Rules.  Use this for Bosses unless otherwise noted.

Undead:
When determining which model to activate if multiple Undead models are tied for all the Activation Choice conditions for the order in play, they are all activated.  This event uses the number of activations equal to models used but the total activations on the card can be exceeded. In this case the card is finished after all the models have completed their actions.(Activate)

The original rules suggested using discretion as part of the IO system as the game and movement is complicated enough that all situations cannot be handled.  While I think I have cut this down, it will still sometimes be required.  One place I would look at specifically if you find the Overlord in a place where 1 action can win them the game with a whole lot of crazyness moving out of strong free strikes or opening up the game such that failure allows heroes to win easy.  If you see that one action with a model can win the game and it only requires slight modification of the order listed (different threat, different order) I would probably have the IO Go For the Win.
Posted by eriochrome at 3:57 PM