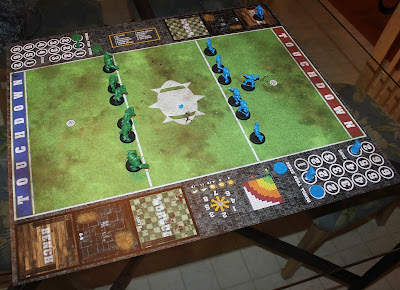 So my youngest is now getting to the age where he can be taught Blood Bowl.  I have tried to teach people the game in the past but it takes a long time to play a game with a new player so I normal get through less than a half when I am showing it.  Blood Bowl 7s to the rescue.  With only 7 players on the pitch for each side and 6 turns per half with very limited rerolls, the games go quicker.

I have been slowly picking up the new plastic teams to add to my collection so wanted a pitch that would fit the bigger models.  The plastic teams work well for sevens also since the often missing models for a optimal league team do not matter with only 4 total non lineman allowed.  I looked around for a pitch from several vendors but no one really listed it as a standard product.  After contacting some of the different makers for quotes, I decided to purchase one made by Mats by Mars.

The mat is vinyl.  It rolls and unrolls nicely.  Since the Sevens pitch has fewer squares it still fits nicely across the table.  I still have not adjusted to playing sideways with the BB2016 pitches. 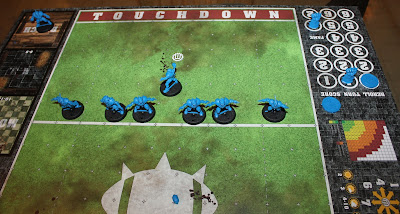 The pitch has integrated sideline items.  Turn markers, Score, Fame, and Reserves up to the Morgue. 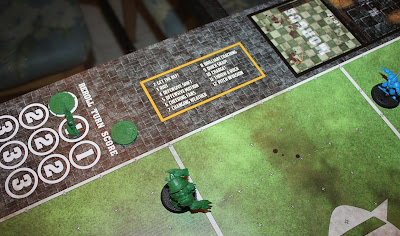 Blood Bowl 7s kickoff table on one side. 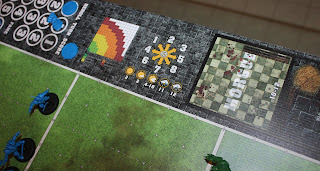 Pass Table, Weather Markers, and scatter on the other.

Overall I am quite happy with it.  I got it in the standard grassy style but they have a whole ranges of background patterns if you want to match your favorite teams.  Now onto training the Next Generation.
Posted by eriochrome at 10:17 PM