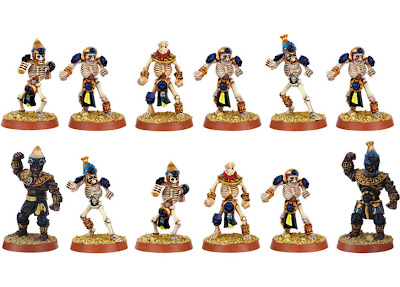 The undead have a long history for play in Blood Bowl with one of the Classic teams being the Champions of Death. Most of the teams are on the newer side for Blood Bowl with Necromantic, Vampire, and Khemri all showing up after the current box set was published. Today I am going to look at the official minis for the Khemri team.

Most of the official blood bowl teams have a very flat look with the models appearing very 2 dimensional. This is caused by the fact that the standard players for most teams are single piece metal casts. As you can see the the GW pic for Khemri above the Tomb Guardians look very planar but the other players have a bit more depth. This is because the skeletons are multipart models but that becomes a real problem during assembly. Lets take a look at the bits. 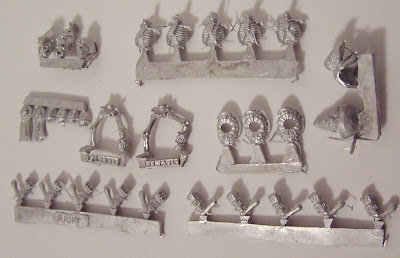 Not only are they multiple pieces, they are tons of pieces with the average model having 6-7 parts. You are free to put them together however you want but the pieces are tiny so actually gluing them together is a total pain. Also since the are metal, the bond you get with most fast adhesives is not great. The two worst parts are the torso to the legs and the arms to the torso. While the torso to legs seems like it has a good surface area to bond the problem comes from the fact that the torsos are attached to each other at the mounting surface. So you have to cut them free then try to recreate a nice flat surface at the right angle to get a reasonable fit. I am not that good a filing so I kept getting curved surfaces on this piece making the mounting hard. The arms are just small.

I found that I used a lot more collars than I planned to since they allowed additional attachment points to secure the arms.

Here is what my 14 player team looks like after getting 2 extra Tomb Guardians from GW Direct. 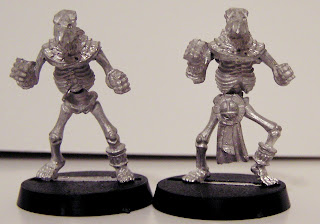 These Vulture heads are used to represent the Throw Ras which have an AG of 2 but do come with sure hands and pass. Not sure who you want to pass to with AG 2 across the board on the team but I guess you will need that reroll. Maybe a lineman with get an AG increase to 3 making him a reasonable target for desperate plays. 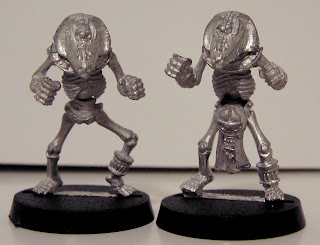 Blitz-Ras have these crocodile heads. 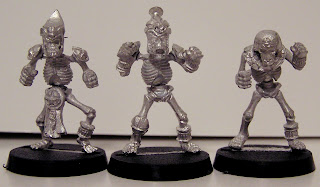 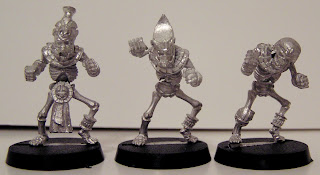 The second 2 in this group I tried for some more interesting poses. One guy getting ready to punch you and the other in a classic orc catcher pose.

And the requisite 4 Tomb Guardians who make the team go. Even with the decay and lose of migthty blow nerfs in LRB 6.0 you need all four to really make this team work.
Posted by eriochrome at 4:03 AM