So for one of my father's day gifts I got the Dungeon and Dragons Cooperative Boardgame: Wrath of Ashardalon. My other gifts where shirts. I have the Castle Ravenloft game which can be used with this game to expand the possible adventures. 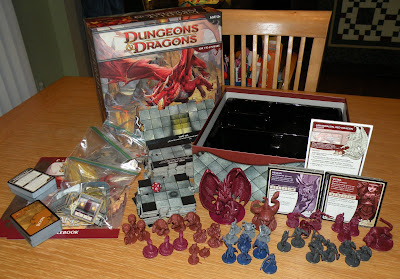 Box contains a divider for storage and all these parts. Interlocking board tiles. Card stock character and villian sheets, cards for random treasures,monsters, or traps, and keeping track of hero powers. Counters for hit points and the figures for the game.

I was shorted 1 figure in the box so I have sent a letter to customer service.

These are the 5 heroes for the game. Dwarf Fighter (not sure who scuplted this dwarf but I think they missed the idea), Elf Paladin, Human Cleric, Dragonborn Mage, and Half Orc Rogue. So pretty similar to Castle Ravenloft with those classes but with different races and Ranger traded to Paladin. 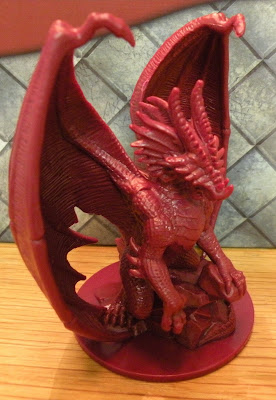 Here is Ashardalon, the biggest baddie in the game. 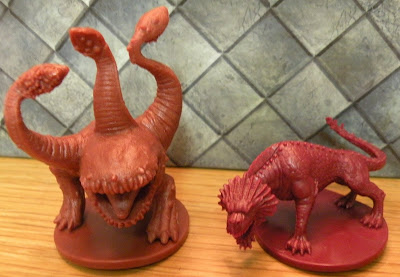 Two other large monsters: Otyugh and Rage Drake. I have a metal Otyugh from my chainmail collection.

Sampling of the basic bad guys. There are 10 different basic bad guys where you get 3 of them.
There is an interesting dynamic in the game that if you get more than 1 of the same monster in play they get to both go anytime one would. 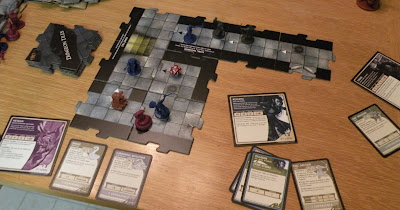 So to play the game you build up a deck of dungeon tiles based on directions from the adventure book, pick you heroes and powers, get the encounter and monster decks ready and start exploring. Pretty much every tile generates a monster and some also cause additional encounter affects. Castle Ravenloft had some problems with an optimal strategy of essentially always have the high defense heroes with the most hit points up front to get the monsters. This game appears to have some new tricks like large rooms that are revealed with a single tile draw.
Posted by eriochrome at 8:52 AM