The Cost of Getting Started with Space Marines 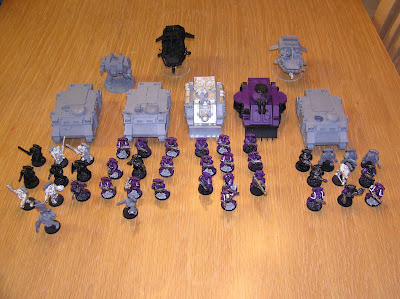 So I was wondering what it would cost to get started in 40K as Space Marines now.  So I worked up a quick list of some basic units to see.  So we have 1 commander, 1 dreadnought, 2 tac squads 10 man, 2 rhinos, 1 scout squad 5 man, 1 Assault squad 5 man, 1 landspeeder, and 1 predator.  That will kit out to about 1000 points with some very limited options.  Add in the just the rules book and the new codex and you line up at almost exactly 400 dollars.  I am not including paints, tools, glue, etc.  Just a very basic playable force and the rules.  That is getting to be real money.  If you are playing with a friend can you really tell them that 400 dollars to get started is the way to go for gaming.

For X-wing which I thought has pretty expensive parts 410 dollars you can get 2 starters, add an addition X-Wing and Tie Fighter, 2 of each of the Y-wings, A-Wings, B-Wings, Tie Advanceds, Tie Interceptors, Tie Bombers, Hawk and then 1 each of the Falcon, Slave 1, and Shuttle.   Essentially everything you need to play a huge variety of lists especially on the rebel side.  As Most of us get into these games through networks of friends and selfishly you want as many friends to play as possible but with 400 dollars to start not an easy introduction.

The new space marine strike force can get you started for less but since it is fixed you probably will end up adding more units faster and having other not used.  They do not currently list a space marine battleforce so no option there.  Maybe you do not mind Dark Angels even though your friend told you new Space Marines are better that probably knocks you down to 300 but that is still a pretty big investment.   Even if you roll back to the vary minimum to play the game which is the starter box and codex you are now at 150 dollars compared to 90 at the last edition.  66% increase in the bare minimum start up cost.  While GW knows that their stuff is addictive like crack to the right people they seem to have forgotten that you got to get people that first taste at a level where they will take it home and get started.  I wonder if the Redshirts immediately start to upsell on the starter boxes thinking that their is a good chance they will never see the customer again or do they down play the additional costs like lacking the real unit rules in the starter box.  I bet they play it by ear and respond to price concerns by downplaying all the missing stuff while try to upsell those who do not flinch at the 100 dollar starter box.

Is there a better way for GW to do this?  I wonder if they started something like buy a battleforce and army codex and get a free download of the game rules.  You still get 150 dollars out of the player to get the basic start going but they have more freedom in terms of picking that first army and you are getting that money without pushing so many extra starter set minis onto the secondary market.  The battleforces do not come with a commander normally so add in another 20 later.  This method also would be better for GW since it is useful to new players but essentially useless to the existing players base after the first time unlike the 60 dollar Black Reach set which probably depressed sales of terminators, tactical squads, and dreadnoughts.  Maybe it only cuts like 50-80 dollars off the start up but might even it out between the different races and get more people starting with a non space marine army which they will probably add a space marine army since everyone has one of those.  Would a promotion like that be helpful to beginners?
Posted by eriochrome at 2:08 PM