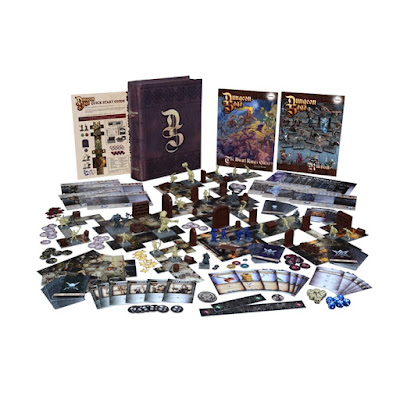 Dungeon Saga has some rules issues.  I already have done a FAQ but certain issues need a little more clarity.  One of the key issues is that the line of sight rules are not clear so I will cover them in some more depth here.

The Author on his Blog, has put up discussions of these rules.  Everything I see there works in the end the same way the formulations I present here do.


The first thing I would like to do is define a new set of terms, Front and Rear Areas.  These are extensions of the Front and Rear arcs that make clarifying some other rules easier. 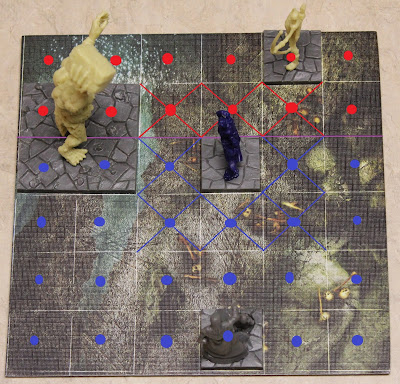 A model can only Shoot things in front of it.

This is a very straight forward sentence but does not actually tell you anything.  What does it mean to be in front.  Obviously Mortibus is in front while the skeleton Archer is in the back but Is the Zombie Troll in front of Madriga?  So with my Front and Rear Area definitions the rule can be changed to:

A model can only shoot an enemy model that has at least one base square in the shooter's Front Area.

This makes it clear that the Zombie Troll can be targeted.

Now these definitions can be helpful for dealing with the question of shooting models from behind.

This question has two issues as the way it is written currently it seems to imply that you can do a ranged attack when next to a model and you have to be next to the model to get the bonus.  I have come to believe that neither of these is the intended reading.  The rules do say:

Shooting works in a very similar way to Fighting, except that the attacker and defender will not be adjacent.

A model that is in the front arc of an enemy model cannot Shoot.

If you assume that "will not" means "cannot" as opposed to "might not" then as written you can never get the rear attack bonus for the ranged attack.  So I propose the following changes:

Under these changes the Skeleton Archer above can claim the -1 to defender if he shoots Madriga. 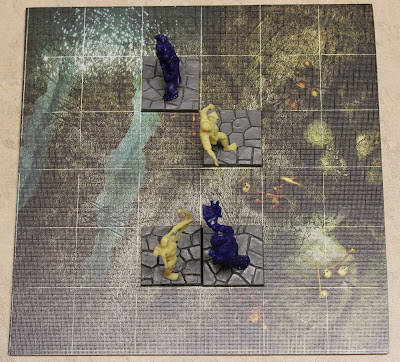 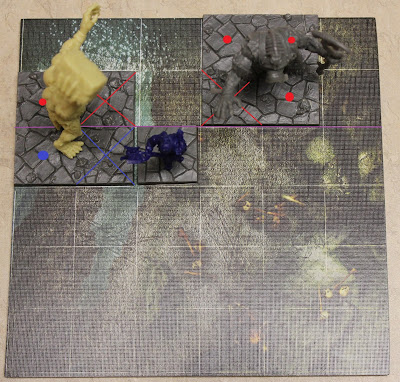 The Front and Rear Area definition is also useful in the issue of rear attacks from Large and Giant Models.  The original rule for this reads:

Note that this means that a Large or Huge model can be in an enemy’s front and rear arcs at the same time. The Large model will only get the bonus for attacking from behind if it is fully within its enemy’s rear arc.

Now the issue here is that the Large model can never be fully within its enemy's rear arc since arcs are only one square deep.  There are two options you can just say that the model can have no squares in the front arc or the model is fully within the enemies Rear Area:

Note that this means that a Large or Huge model can be in an enemy’s front and rear arcs at the same time. The Large model will only get the bonus for attacking from behind if it is fully within its enemy’s rear area.

This rule then covers both fight and shooting attacks. So above the Zombie Troll cannot claim to be a rear attack but the Boss can.

The final part of the shooting rules is the hardest to deal with.  The line of sight rule is written as:

Now I read this to say that if I can find any line between the shooter's and target's square that is blocked than line of sight is blocked.  I do not think this is the intention as this makes it very easy to block line of sight.  The author wants you to just be able to find a single clear path.  This is a better way to structure the rule since finding a single clear path is placing the requirement on the shooter to prove they have a shot.

One other issue is how to treat the edges of occupied squares.  Do models block all the way to the edge and including the edges and corners?  Based on rules from the Dwarf King's Hold: Green Menace, where models blocked shots at the corners I have decided to have that rule hold here also.  The new ruling is as follow:

When measuring the range, use the straight edge of the range stick to verify that you can find at least 1 straight line starting inside the shooter's square and ending inside the target's square that does not touch a square contain a line of sight blocking object like another model or a bookcase or edge of the tile set.  If that single clear path exists, line of sight is not blocked and the Shooting attack can proceed.

So lets put these rules to practice.  Below the heroes have gotten themselves into a tight spot. 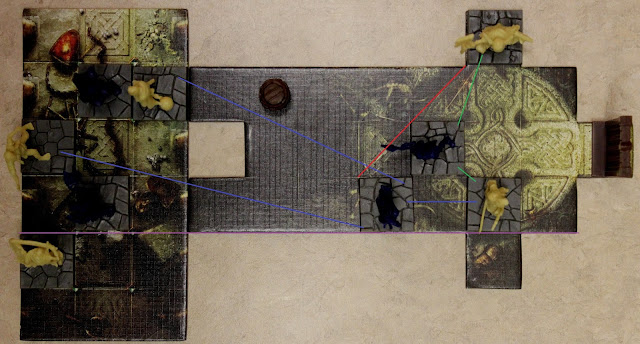 Madriga has several targets marked with blue lines.  She has a clear line of sight on the Armored Zombie to her right.  Now there are two more available targets to her left.  She can draw a line of sight to the Ghost.  This line must go through the square with the barrel so the Ghost has cover but he is also being shot from his Rear Area so both the attack and defense are at -1 die.    If you attempt to make a line that does not go through the barrel square it would touch the corner wall and be blocked.  She can also target the Zombie on the far left as I can find a line that goes between the squares that neither touches the other Hero's square or the wall from the blank in the tile.

There are also two models she cannot target.  The easy one is the skeleton warrior on the left is in Madriga's Rear Area so cannot be targeted.  The Dwarf Revenant can also not be targeted since no clear line can be found.  All lines between the two squares either cross the edge of the board or go through Danor.  The red line shows the most likely path between the two squares but it touches both Danor on the right and board edge on the left so it is blocked by both of those.  If Madriga steps 1 square to the left then she could target the Dwarf Revenant as you could draw the line from the left front edge of Madriga to the left front edge of the Revenant.

I also drew in two green lines of Danor to use Burn.  He can Burn the Armored Zombie who is next to him as that spell can be cast at adjacent models and it can also be cast at the Revenant behind him since the spell does not require line of sight.

Hopefully that helps people a little more.  The keys are to find one clear path and that models and objects block line of sight all the way to and including their edges and corners.