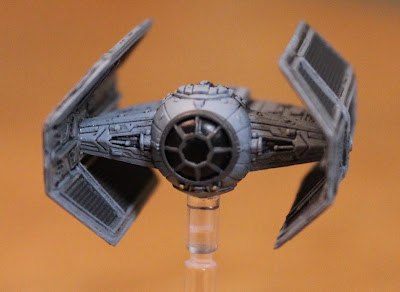 The Imperial Raider box also comes with a Tie Advanced, I assume to try to bring new life to an unloved ship who just could not compete in the early meta when you could essentially get 2+ Tie fighters for its cost. 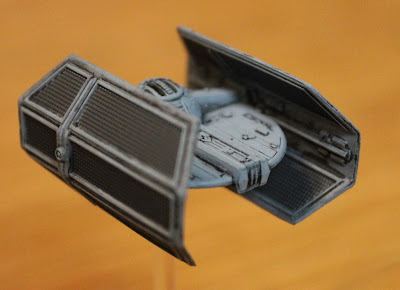 Model looks pretty much the same so it appears to be a repaint.

The tone is darker with a little more blue. Also does not look like the details are pickup up as much.  These type of releases are more about the cards than the ships so what goodies do we get. 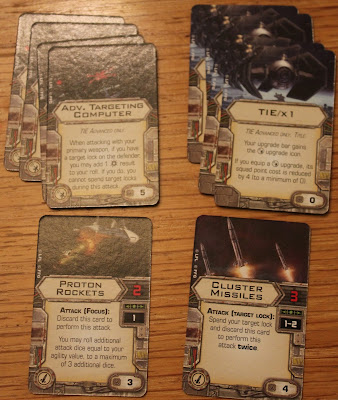 You get 4 copies each of the TIE/x1 and Advanced Targeting Computer.  The TIE/x1 allows you to add a system type upgrade for 4 less points than the card cost.  That is pretty good.  I discussed in the M3-A post  the issue with cards that charge you to open an upgrade slot than add the full cost of the upgrade makes them tough to justify.  The advanced targeting computer is a 5 point upgrade but in reality can only be used with the TIE/x1 card and it allows you to add a critical hit to you attack on a target that you have a target lock on.  You do not and cannot spend the target lock.  This is pretty much taking you 2 attack ship and making it 3 dice with an autocrit. 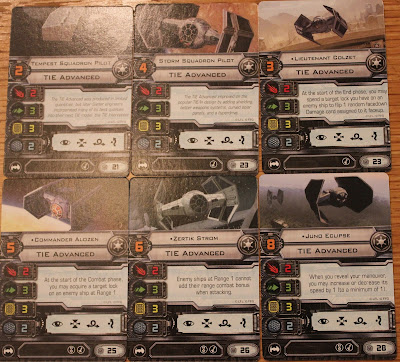 They also add 4 new named pilots.  I think Commander Alozen has the best synergy with the new targeting computer here. 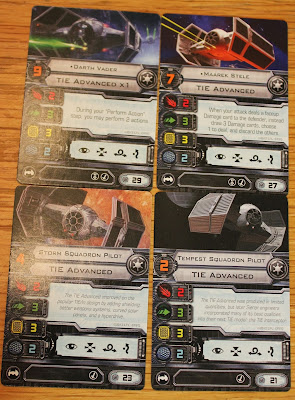 But looking at the original pilots also, I think Mr Stele is the best with the Advanced Targeting Computer.  Give him a weapon which always generates a crit if it hurts someone and then let him pick which damage card to apply.  He is still really expensive and probably would not hold up in the ultra competitive meta but interesting.

You can used any of the system upgrades and most of them are less than 4 points so they can be added free to tie advanced now.  There is one that gives you 2 hits automatically from the Scum ships which is good for a 2 attack ship.  I like how they freshened up the ship but I am not really down with having to buy a 100 dollar expansion to get the cards.  They give out 4 which is pretty much going to flood any trading or secondary markets as only someone totally hardcore is going to have 4 tie advanced.  I have 3 now but one was a mix up on a gift where I had wanted another bomber.
Posted by eriochrome at 9:08 AM