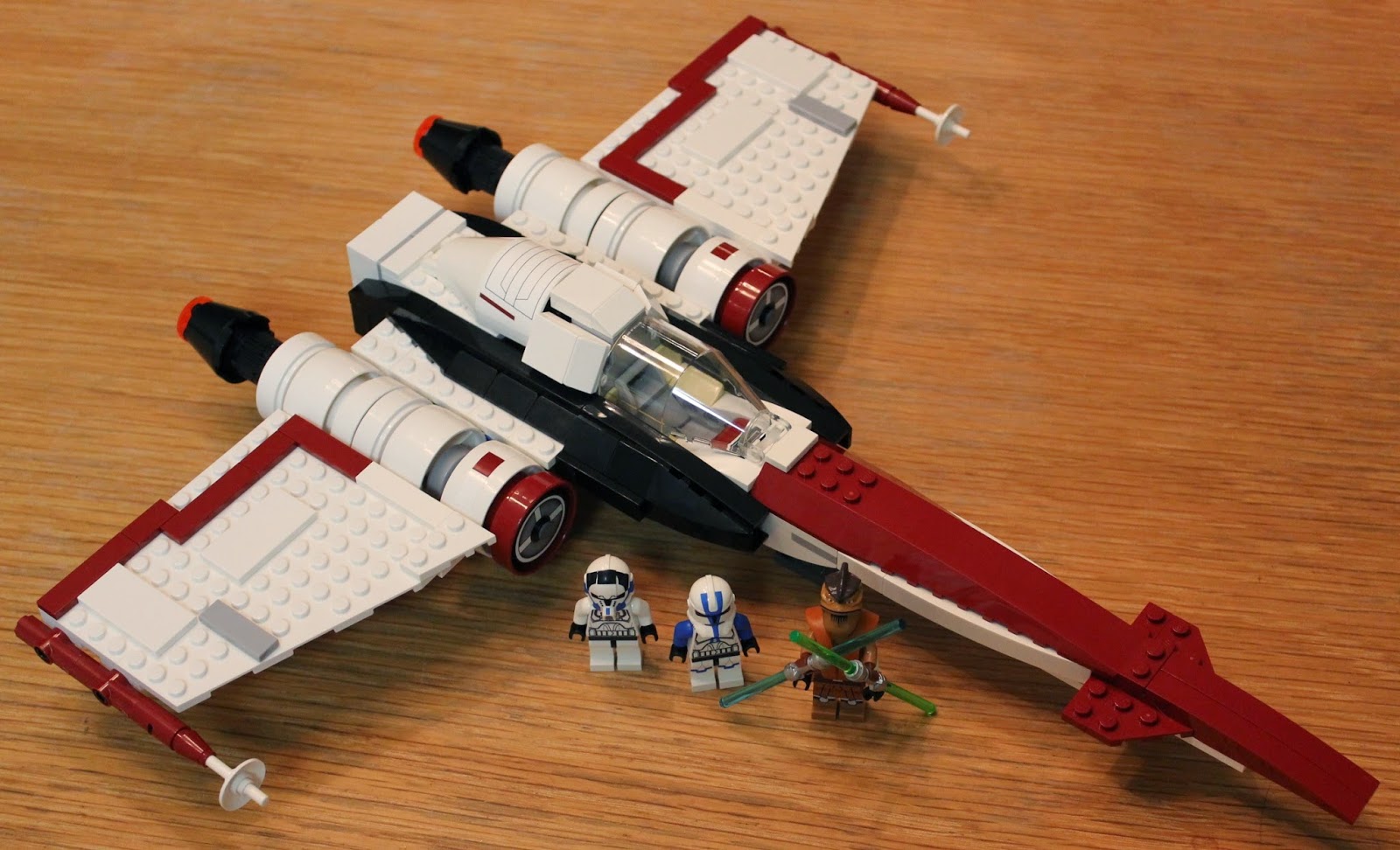 Today we are looking at the Lego Star Wars Z-95 Headhunter from the Clone Wars line.  You get the ship and 3 minifigures.  The ships is pretty big as you can see from the pictures but it is also very flat. 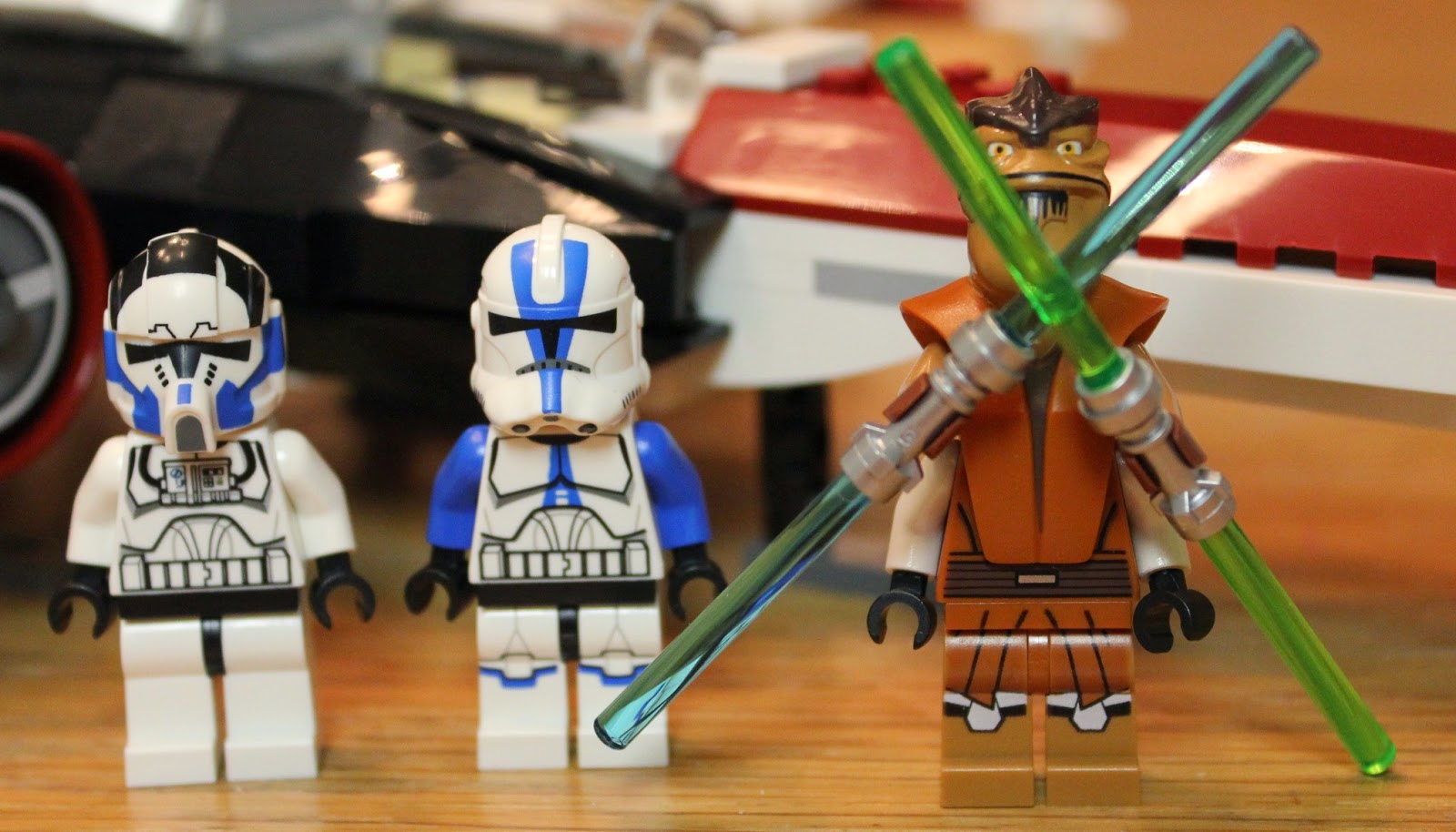 The minifigures include a Clone Pilot, 501st Clone Trooper, and Pong Krell who is a Besalisk Jedi Master.  I am guessing he appeared in the cartoon series but I never saw him as I watched it very infrequently in the later seasons. 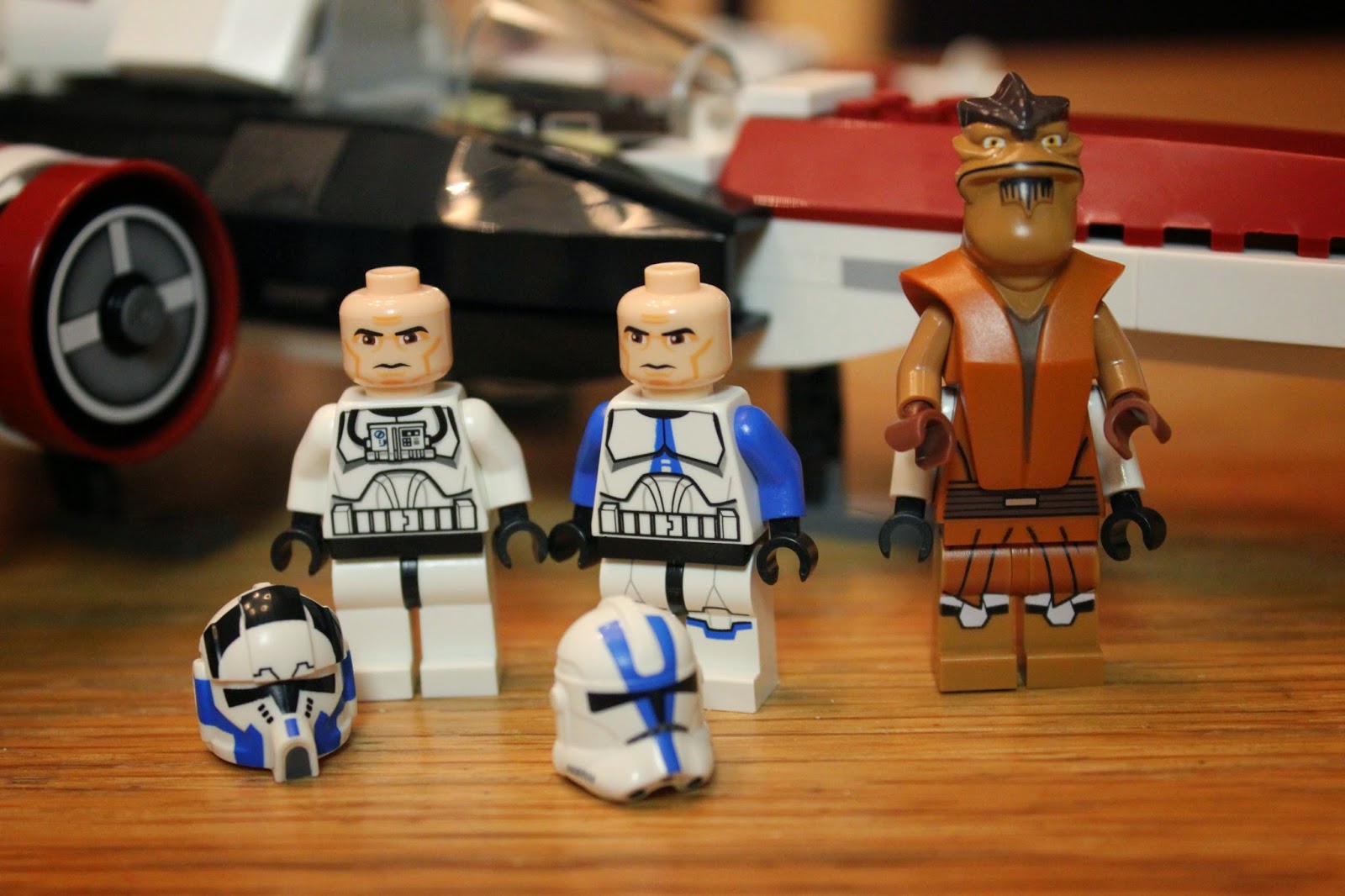 Traditional Clone faces and a double torso setup for Krell to get the 4 arms.

The back of the ships here again you can see how flat it is.  The wings connect to the engines using pegs and the engines to the body with pegs also.  The engines a stacks of cylinder type pieces. 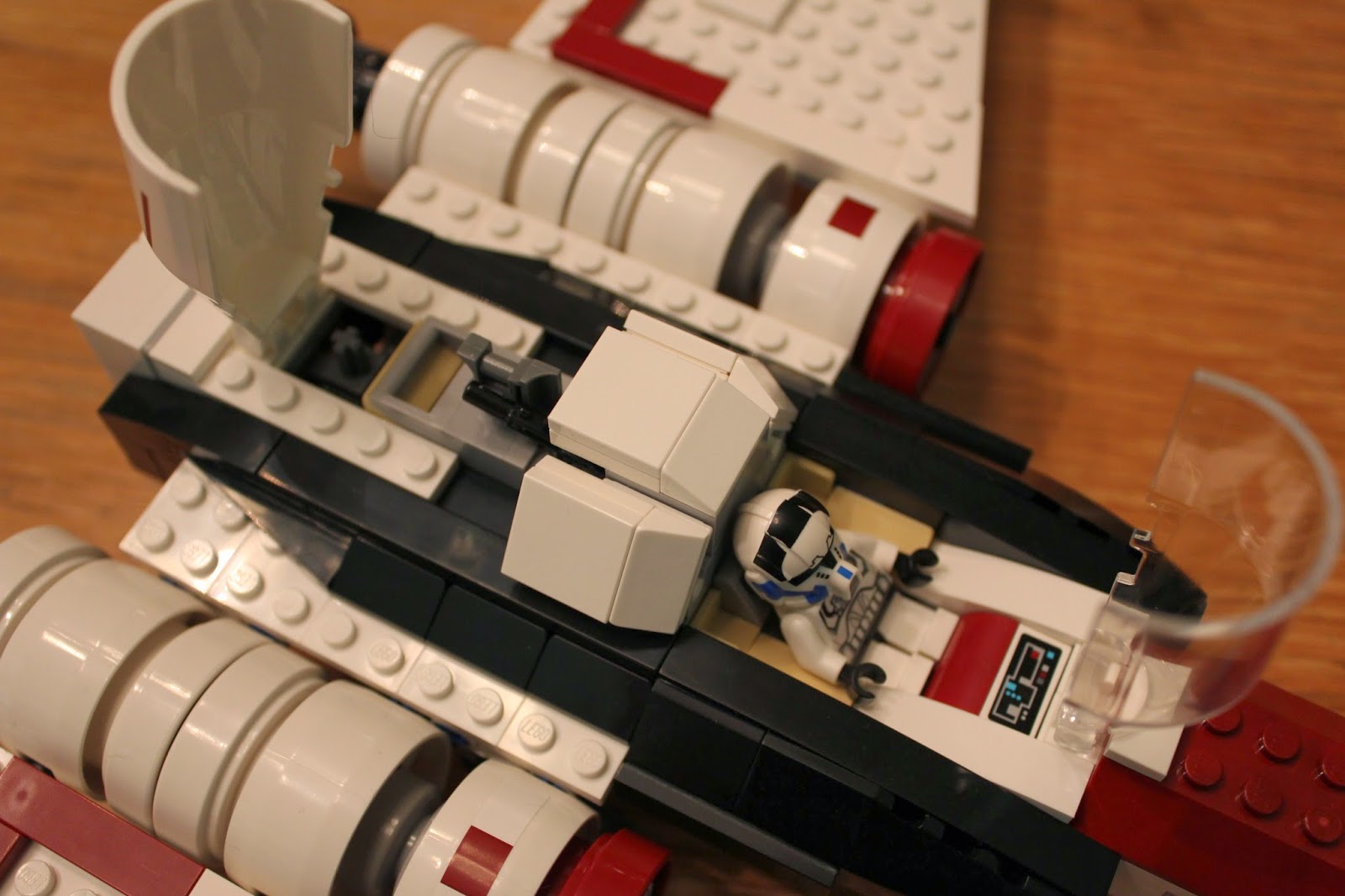 The ship comes with a storage area for the pilots gear. 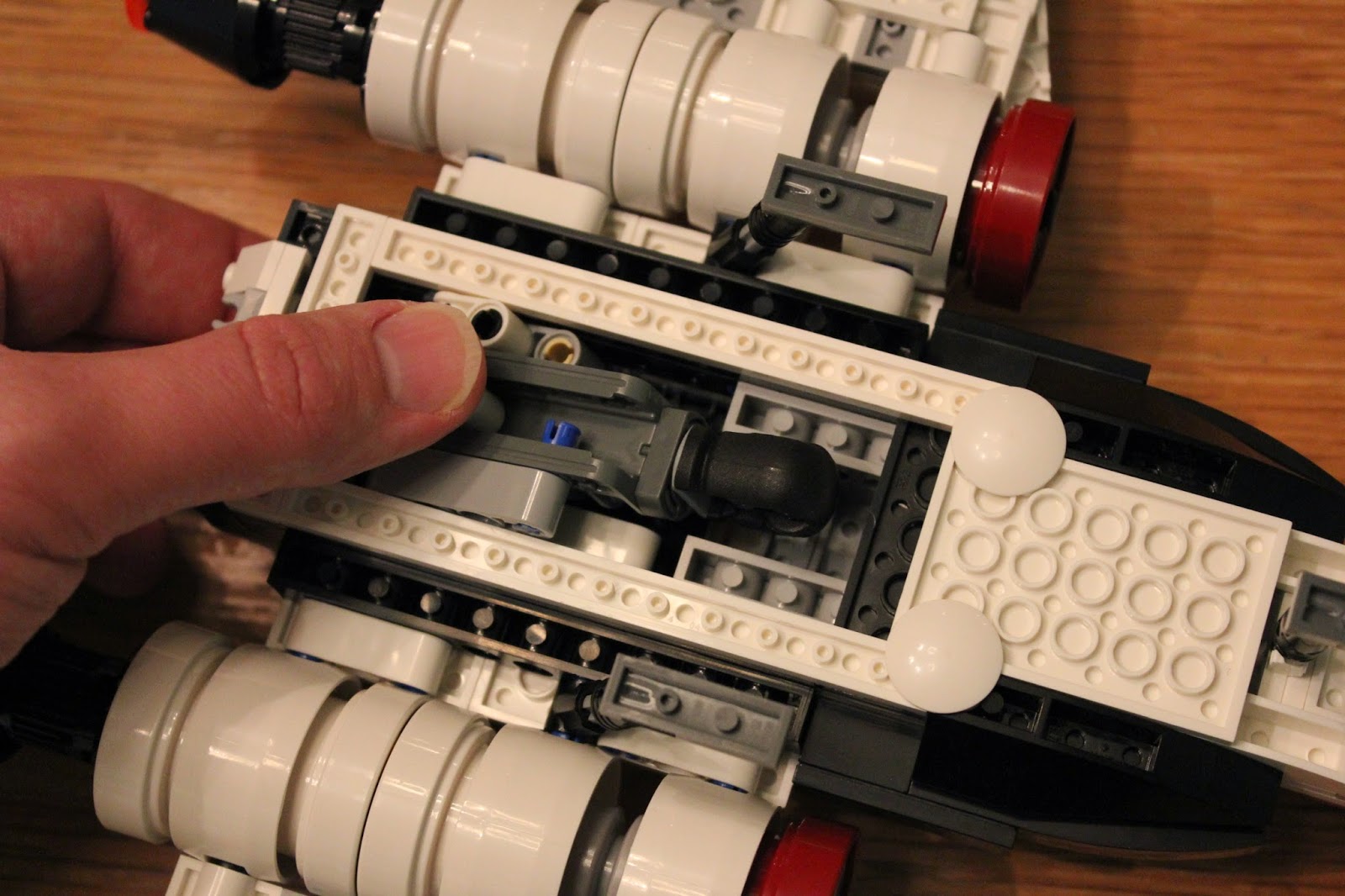 Instead of flick fire missiles this ship comes with a spring loaded weapon which fires down so I guess it is for ground support missions.  Maybe that is why the ship is so flat to give it better flight characteristics in atmospheric flight.

You will notice that this ship looks less like a half winged X-Wing than other Z-95 variants with larger engines further out from the hull.  Not sure if their is a fluff justification for this or the fact that the ship is extended universe so various designers have played around with it.

Overall I do like the ship as I am a sucker for anything from the X-wing computer game series but I think the retail was like 50 dollars so is really steep.  Lego must think they are GW.  My wife found this one on clearance at Target last summer so got it for me.  So nice of her.
Posted by eriochrome at 11:13 AM