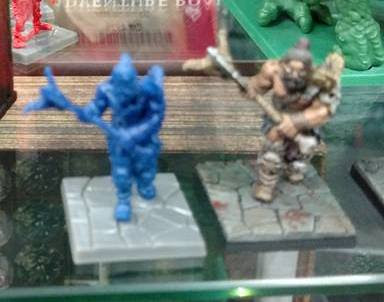 So I was looking at some images from what companies had on display at Gencon and these two images caught my eye.   These are images of models from Mantic's upcoming Dungeon Saga kickstarter that I bought into.  Anything look funny to you about the above image.  Seems to me that the painted guy is bigger pretty much everywhere.  He is not even standing straight up but he seems taller.  His weapon head is larger, legs thicker, etc.  So on the right we have a painted resin master that they used to advertise and sell the kickstarter and on the left we have a production sample.  This is not the kind of side by side shot you see very often and to bad it is not in focus on that plane but they certainly do seem noticeably different in size.

I contacted Mantic about this and they were nice enough to reply that the one on the right is a resin master and it is common in the industry to use images of those in the media materials.  I remember GW had a lot of unhappy customers with their Moonscape terrain a few years back where the used the painted resin masters for preorder sales of limited production run but the product was vacuum formed plastic that was not even close to standard GW plastic in detail capture let alone the resin masters.

For something like kickstarter when you do not have the plastic mold tooled yet you do not have the real models to show anyway.  They claimed this was normal shrinkage in the production process.  That seems like a lot of shrinkage to me.  I remember when GW went to Finecast they said the models would be better since the resin had less shrinkage than the metal.  So this is just an extreme version of that I guess.  Measuring the weapons I get about a 12% shrinkage.

Here are two more of the models nearby for comparison.  Seems like the plastic one is smaller again looking at the various parts.  So I would guess this is going to be pretty common that all the models will be smaller than the ones used in the photos which cannot help the detail transfer but that leads to another interesting question.  If you bought the resin collector versions(I did not) will they be noticeably bigger than the standard plastic models.

Now I think everyone knew that there would be a lose of detail in the soft plastic compared to the resin or else they would not have offered resin versions.  It is also just a board game and is not all about the models but I am still sort of surprised by the amount of apparent shrinkage.  Finally, it is kickstarter so people are general just happy to get everything that they paid for reasonably close to the promised date.  I know there was huge disappointment in the product delivered for the Relic Knight kickstarter and the Robotech RPG Tactics still has kits due with the rumors being that there are no funds available to tool the molds.  Maybe I am just too much of a nitpicker and this is a good problem on the scale of kickstarters disappointment.  I remember last month I was knocking reaper for showing metal versions of models that they have already have Bones for in their kickstarter.

What I probably really want is clearer disclosures, images should be labels "Painted Resin Master" or "Painted Production Sample".  Once you get the game in house(which they do now) maybe you should have your painter do the actual game models.  I have seen some very nice paint jobs on the Mantic soft plastics so they can look pretty good.  They might not look as the resin masters but they would be the truth, but the truth probably does not sell quite as well in the end of the day.
Posted by eriochrome at 11:28 AM