So the Deathwatch Killteam looks pretty solid in the new kill team.  Good customization options still and you can build them with a inexpensive box.  They are a little light on wounds with only 5 models but even their base guys hit pretty hard in both ranged and melee.   While the Grey Knights are probably better than the Deathwatch due to their storm bolters and powers, the special issue ammo for the Deathwatch does have its uses. 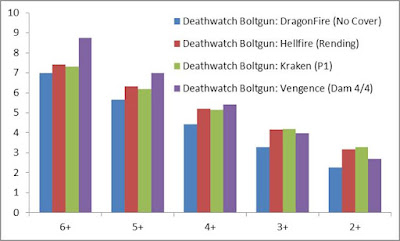 When the target is not in cover than the for low armor targets (6+ to 4+) the best Special Issue ammo is the Vengeance round where the extra point of damage on normal hits is better than Rending or P1.  This is sort of a surprise but if you look at the damage vales for weakly armored targets the baseline is about 7 so a little better than 2 hits.  An extra point of damage on both these normal hits would net you 2 additional points of damage.  You do not get this entire boost as some the damage is related to criticals which are 4 points for all the round types.  The Dragonfire would not be used as the target is not in cover for this example.  Once you get to 3+ saves then switching to the Kraken round is the best choice. 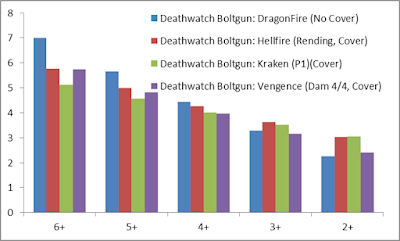 When the model is in Cover the obvious choice is the Dragonfire rounds to deny the automatic save of the cover and are the best choice for 6+ to 4+ armor saves.  At 3+ the Hellfire is the best choice while it 2+ the Kraken narrowly beats it out but by such a tiny margin that sticking with Hellfire to have less to remember is pretty much the same.

Posted by eriochrome at 9:00 AM