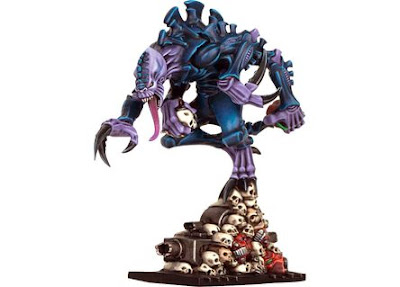 Next we will look at the lightening claws. How much does 2P6+1 help? Without guard the lightening claws will be winning 11.81%, tying 10.42%, and losing 77.78%. Guard is good for the claws since you can always save you tying die and reroll the other to go for the win. This gets the claws up to 18.84% win, 15.162% tie, and 66% dead. You might notice that these are very close the sergeants being attacked on the flank even though the lightening claw has an extra die. This makes sense due to the fact that the broodlord is 7 or above 62.5% of the time so more than have the time you have no hope to win that combat no matter how well you roll.

For the last part of this post I am going to look at the broodlord verses the thunderhammer/stormshield sergeant. Here things are interesting. The Block ability removes one of the dice from the broodlord so now he just rolls 2 and adds them. This results in the exact same average value for the broodlord of 7 but changes the distribution substantially. 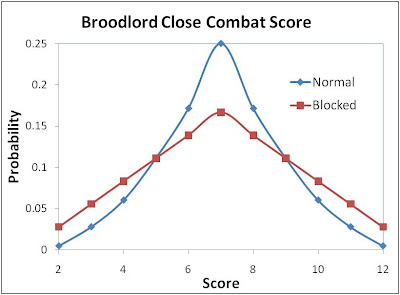 As you can see from the figure this essential broadens the distribution. It increases the probabilities for values for which you can never beat the broodlord but also increase the probability for values where you can win more easily. This coupled with the +2 to his die actually makes the thunderhammer win 25.92%, tie 11.57% and lose .625%. Throw in guard where you reroll ties on a 3-5, the thunderhammer wins 35.49%, ties 13.89%, and dies 50.62%. Still not very good but 3 times better than the normal marine.

I know there were a lot of numbers in the post so here is the summary figure shown in classic traffic light style for the marine player. That is a whole lot of red for dead blood angels. 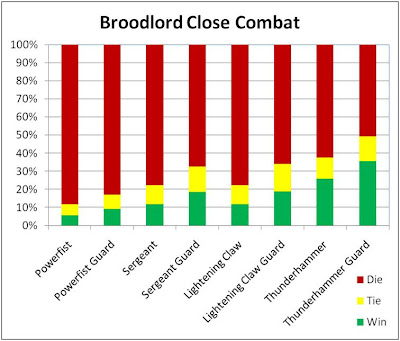 Posted by eriochrome at 8:35 AM