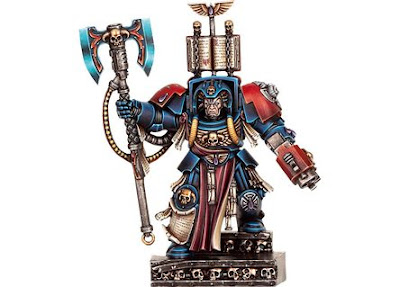 Now, the librarian should never lose a combat while he has psi points left since he can of course not use them once he is dead. He can choose to spend them after seeing the dice so there is not even risk involved. Stealers will be attacking him just to sap away points limiting what else you can do with him(like smite the broodlord). Basic combat percentages are win 34%, tie 16.6%, and lose 49.4%. This is better than a standard marine since he has the +1 but still not very good compared to the close combat specialists.

So the first question is do you spend your points up to get the win or the tie. Average number of points spent to get a tie is 1.08 while the win is 1.74. A healthy jump but I would think you would want to go with the win since just getting the second tie costs you 2.16 on average then so the win straight away is cheaper in the long run. You might go for the tie if the stealer is out of action points and will block additional stealers from getting to you this turn, but that is a general rule of thumb for most of the marines.

What about the Librarian on Guard? The question here is when should he reroll his die (tie or loss) and when should he just go for the win straight away with points. The optimal decision for conserving psi points on average is to buy your way to victory if you have a combat score of 5 or 6 (die 4 and 5 +1) since the stealer also has a 5 or 6 in these cases. You should also buy your way out of a 4-4 tie but other than that reroll. So you would reroll any die of 2 or 1 and a 3 if you are currently losing the fight. This decision tree will get to a 1.12 psi points for the victory on average. If you are playing for the tie the psi point average can be as low as .6.

When rerolling here, I would remind you that this is averages and if you are low enough on psi points such that you could roll a result you could not buy your way to victory and are sitting on a point where you can buy yourself out off currently, I would probably take the sure thing. These reroll decisions are for use when you have the psi points to gamble and want to try to get the most use out of everyone. Never gamble the life of your librarian to try to save those last few points.
Posted by eriochrome at 8:33 AM