Anyone who follows this blog will know that I have an interest in the probabilities in Gaming.  I have my Math Hulk series where I examined the attacks in Space Hulk for all the possible interactions.  I played around with an X-wing attack calculator and even calculated how many missiles to the center of a Razorback before the advent of hull points.  Today I am going to look at the Dungeon Saga dice mechanics.

Mantic's new Dungeon Saga game has an interesting Attack mechanic.  The attacker rolls his attack value 6 sided dice and the defender rolls his own number of attack value dice.  They then both compare those to the defenders armor.  After removing all the dice the do not beat the defenders armor, the attacker and defender compare their remain dice against each other one by one starting with the highest.  For each comparison, attacker needs to beat the defender value to score 1 success and gets 1 success for each extra die he has that beat the armor value than the defender does.  For example the Ranger attacks a Skeleton,  the ranger has 3 attack dice, the skeleton has 2 with an armor value of 2.  The ranger gets a 3, 5, and 4 while the skeleton gets a 6 and a 2.  All of the Rangers attack dice beat the 2 armor so his ordered dice are 5,4,3 while the skeleton on beat the armor with the 6.  Doing the ordered comparison, the Skeletons 6 beats the Rangers 5, but the skeleton has do dice left to compare with the Rangers 4 and 3 so the Ranger gets 2 successes against the skeleton.

Now these dice mechanics are interesting in that it is quite tedious to calculate the probabilities analytically.   In the above example, if you wanted to calculate the probability of 1 success than you need to find all the dice combinations for the Ranger and Skeleton that yield 1 success after the two stages of comparison.  For example 3,2,1 vs 2,1 yields 1 success but so 6,6,2 vs 6,2 as how both sets interact determines the results.  Since there are 7776 different combinations for the 5 (3+2) dice rolled in determining the attack results tabulating all their results and chances of occurring would just not be fun.  It is much better to use a computer program to simulate the attack process since you just code up the comparisons and it automatically can keep track of how often a final result occurs.  Run it in a loop a billion times and you get pretty accurate probabilities.  So I did that and tested a couple of examples. 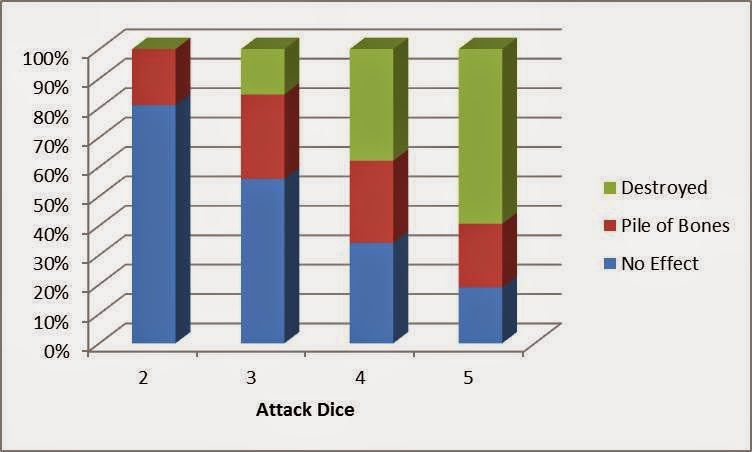 First up we look at the number of Attack Dice affect on the basic Skeleton with his 2 dice and 2 Armor.  The Heroes attack dice vary from 2 to 5.  The scaling seems pretty reasonable with each additional attack die after 2 netting about 20% to the destroyed result and the conversion to pile of bones rate seems to always be about 20-30%.   In the current form of the alpha this information is not that handy since the Heroes each really only have 1 attack that makes sense to use (Wizard Attack Spell with 5 dice way better than his 2 dice staff attack). 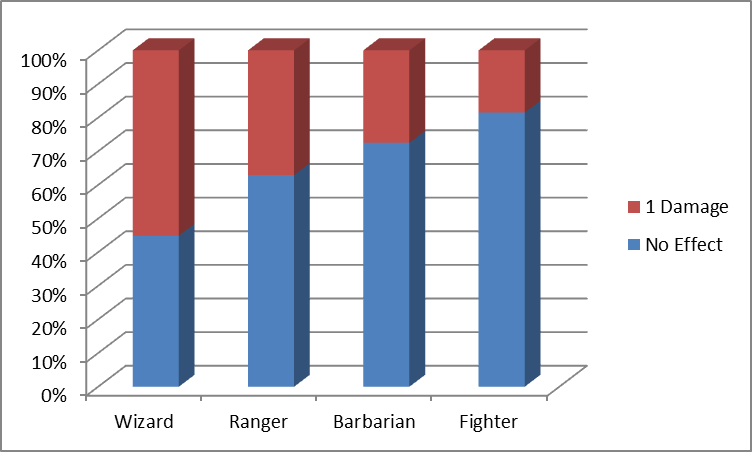 Now the Heroes have a different table to see what attacks against them do.  Any successes by the bad guys nets 1 damage to them.  This threshold type setting means that while the wizards with his 2 attack dice and 1 armor is more likely to be hurt by the skeleton than the 5 dice and 4 armor dwarf the difference is not as much as you would expect for such different sets of values with him being hurt ~60% compared to the dwarf's ~20%.

Overall the mechanics seem pretty interesting numerically which when combined with the tables can yields some nice variance but one has to avoid making the tables to complicated such that players do not just have them memorized after 1 or 2 run throughs.  Currently the are pretty simple and this is not a problem but they have added a lot of new monsters not covered in the alpha yet.  I am probably the only person though who cares about the probability structures in games that they do not own and will not actually be released for a year.
Posted by eriochrome at 7:41 AM