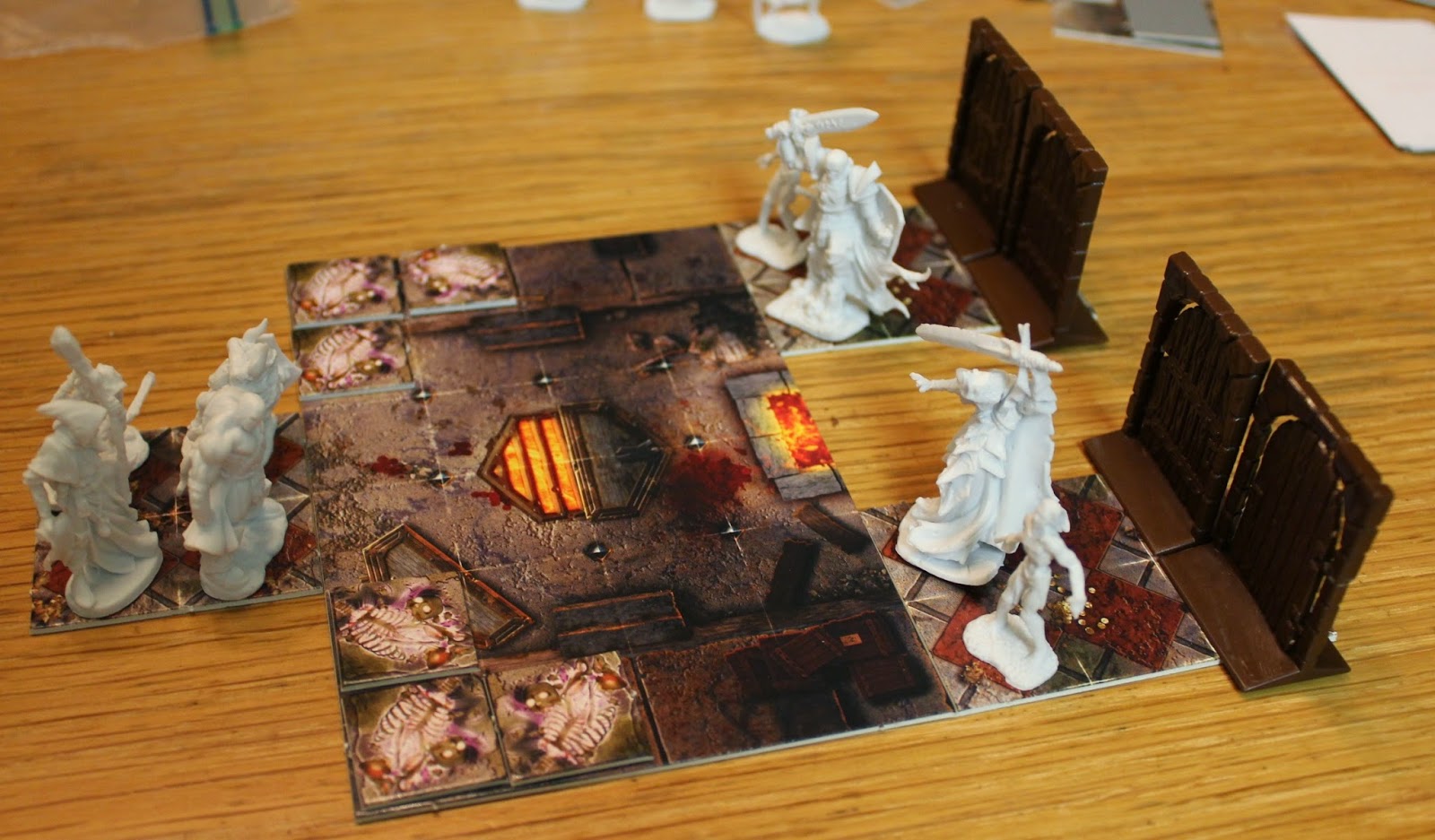 In my continuing coverage of the Mantic Dungeon Saga kickstarter,  I played the real scenario provided with the alpha rules.  The first two test games, Journeys from the East and West,  are more of training exercises to help you learn the rules and are not designed to be balanced.  This scenario starts with all four heroes together at the entrance of a small room with 6 piles of bones and 2 armored zombies (represented by Reapers Bones Liches/Wights) and 2 normal zombies.  Behind the zombies are two pairs of doors which need to be opened to get to the next stage of this scenario.

The Heros started by taking the fight to the zombies but a few bad rolls and some aggressive card play from the necromancer put some hurt on the heroes.  The eventually cleared the first room down to two bones piles being babysat by the Ranger and Wizard when the dwarf breaks open the door.

The second part of the dungeon is a larger room with 4 more bones piles and a Dwarf Revenant (metal dwarf) over by the next door which breaking through wins the encounter for the heroes.  Flush with confidence from fighting out of a tough spot in the first room the dwarf wades into the second room.  I made a critical mistake and place the dwarf in a position combined with the still standing door blocked access to the room the the barbarian.  The dwarf was then jumped by the raised skeletons and revenant before the barbarian could break down the other door to help out after 2 turns of trying. 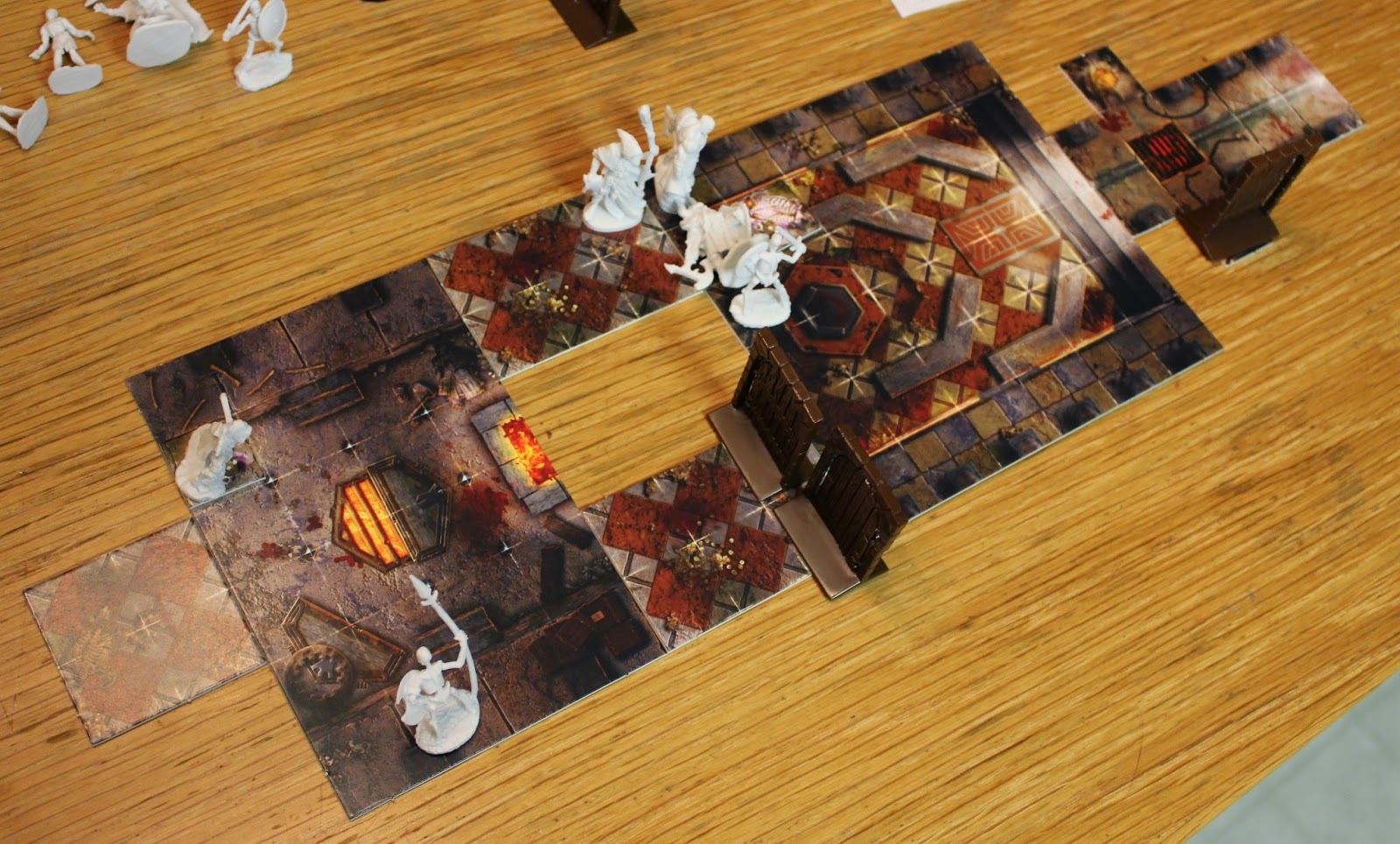 The three heroes knocked down the undead in the second room but in the end a lone remaining skeleton gets that last wound on the dwarf forcing him down for a dirt nap to be later raised by the necromancer to help him on his path to world domination.

So the necromancer won this round and I learned some things about how to play the heroes better.  I had previously commented that in the training mission with the two fighter types that they seemed sort of bland.  This was less a problem in this mission as I was controlling 4 heroes and needed to worry about activation order to get the most outnumbering bonuses and not block other lines of sight or paths.  Might be an issue though if you had 4 players each with one hero for this scenario so the heroes probably need a few more abilities at the start or pretty quickly.

I commented in a previous post that the dice test used in the game is very interesting.  It is deceiptively simple but has some nice features.  In the climactic point the mighty wounded dwarf  warrior was under attack from a lone skeleton.  Even though the dwarf has 4 armor and 4 dice to throw versus the skeletons 2, the skeleton just needs one of those 2 to come up as a 6 when the dwarf fails to also roll a 6 to get that 1 wound.   This means that no monster can really be taken lightly as you can fall more easily to a series of basic skeletons than to the much tougher single Revenant (4 Dice and 3 Armor).

I am impressed with the game play and will most likely be throwing down for the game on Sunday morning before heading out for the day during the final hours.  The kickstarter is not a model bonanza but they have a lot of ambitious claims about what the rules will cover and allow which makes me excited as I already have a lot of fantasy minis and have been looking for more options to put them to use.  The freelance designer of the game has a blog where he presents ideas and listens to players which is something I cannot say about some of the big companies so I have faith they will deliver on at least part of the potential I see in this game.

Update:  Some people on the designers blog thought this mission was to easy for the heroes once they learn to cover piles of bones to prevent raising and getting free strikes on them when they try so I redesigned the starting positions 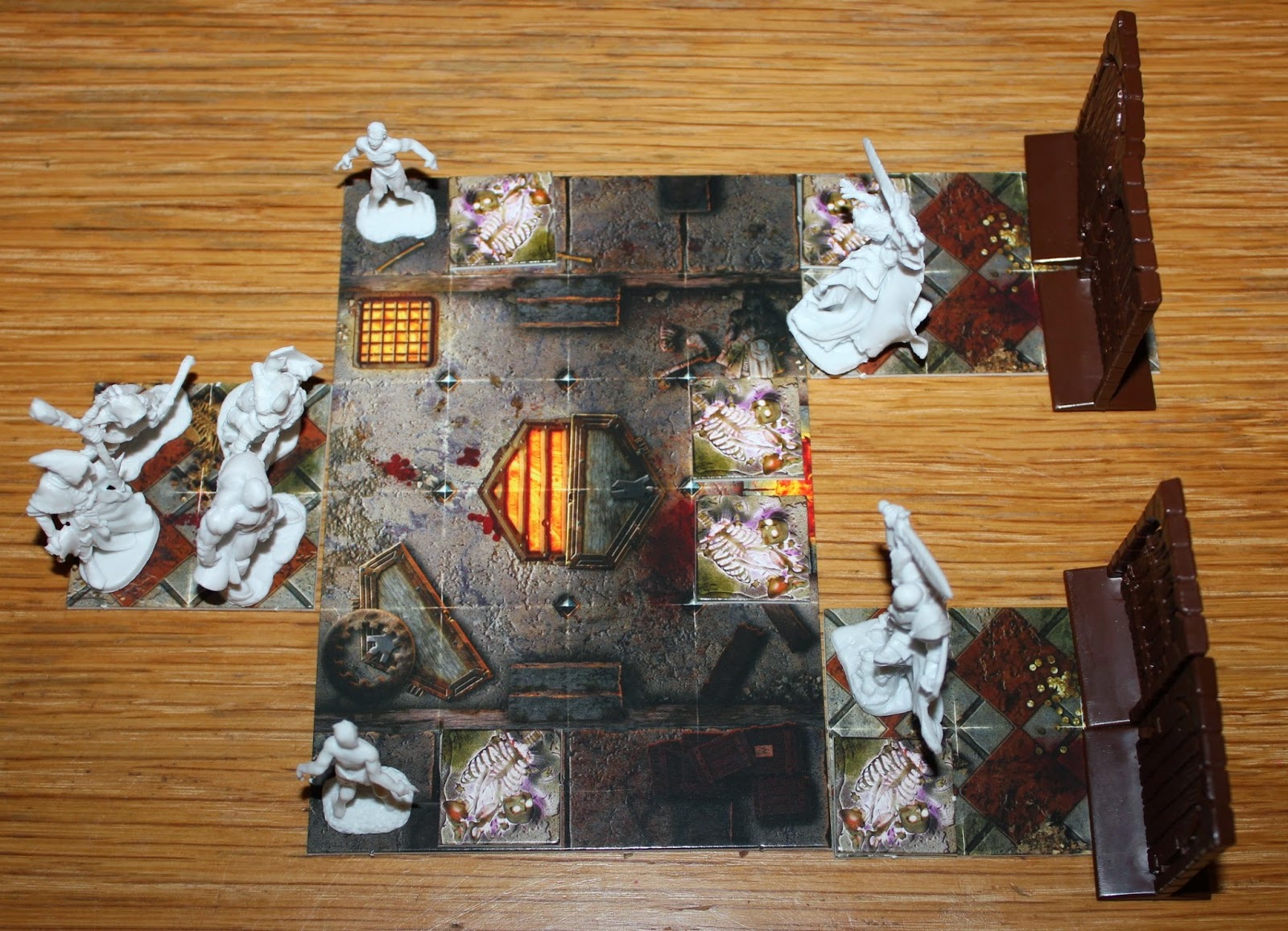 In the first room I swapped the positions of the normal zombies with the pile of bones in the corners and moved the two piles of bones closest to the heroes to straight ahead.  This makes it harder for the heroes to get control on the piles of bones without advancing more into the room and splitting up more. 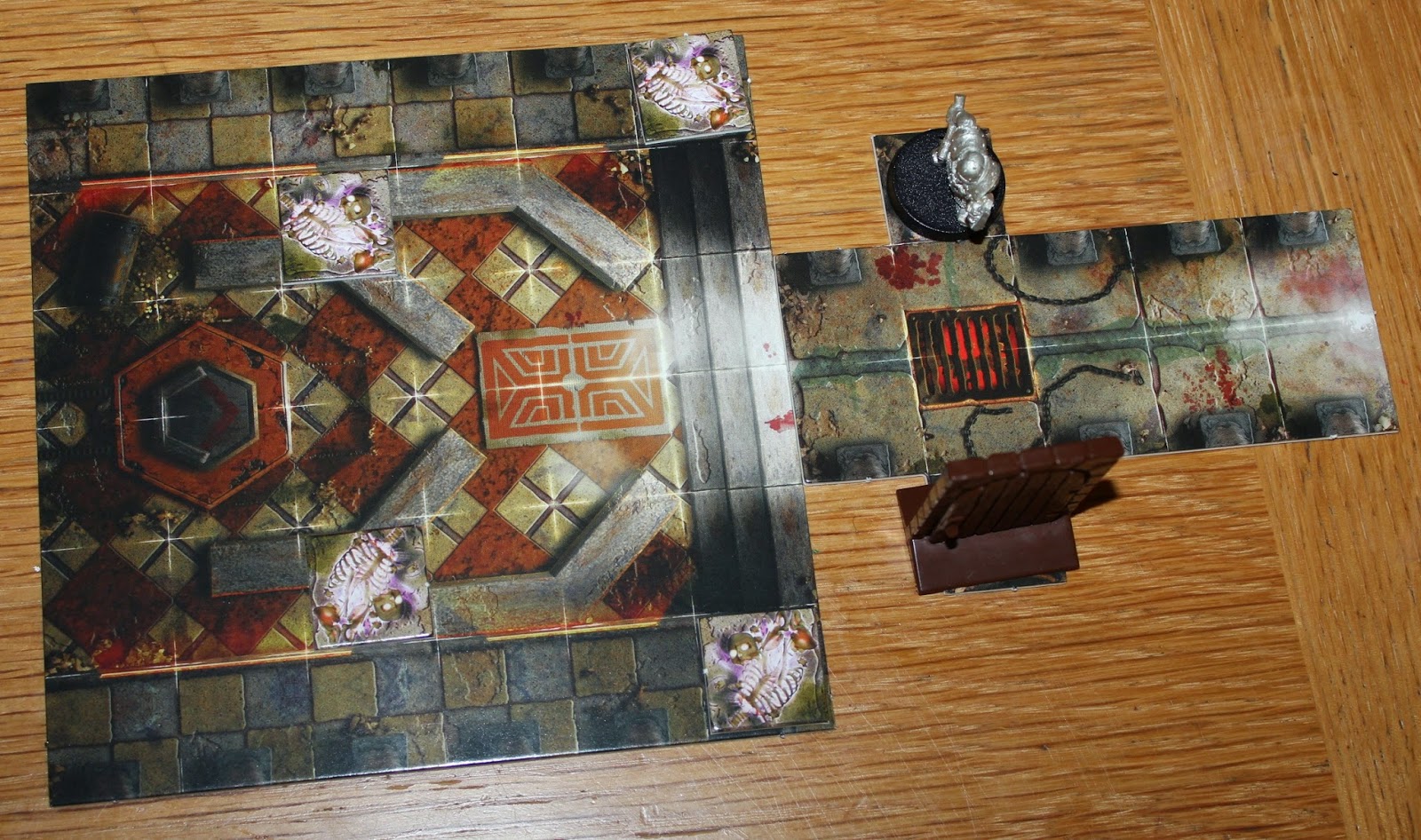 In the second room, I again just spaced the bones out more such that a single hero cannot cover one and free strike at the other three.  At best you will get one covered per hero but if you do the heroes will be spread out when they need to deal with the revenant.
Posted by eriochrome at 11:44 PM