The Mantic Kickstarter for Dungeon Saga: Dwarf Kings Quest has now reached the half way point as I was going to review where I feel it stands in terms of value and where I think it should go and what information is still poorly presented.  The boxed game now includes 7 Heros, 4 Villians, and 18 Monsters with the lowest pledge throwing in a 9 Monster Undead pack, 6 Monster Pack for the Expansion, 1 Hero from the Expansion, and 4 Kickstarter exclusive characters.  There are also 3d plastic dungeon dressings which I am not sure if they are part of the basic game box or an extra. 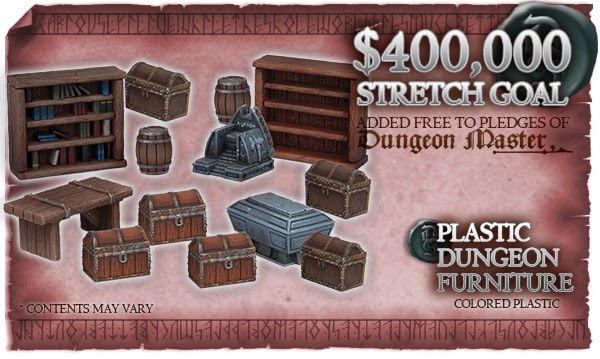 The basic game box (with the dungeon dressing) now appears about on par with Descent which can be had for like 65 dollars, the undead booster pack is list at 15, the Monsters and Hero from the expansion is about 10, and the 4 exclusive characters as amount to about 10 which adds up to about 100 dollars.  So the value looks about fair if it is a good game.  Sort of reminds me right now of the second reaper kickstarter which ended up at a fair price while the original Bones kickstarter ended at an amazing deal.  Ofcourse that is more of a cash and carry value as opposed to a cash and wait and see when it arrives transaction. 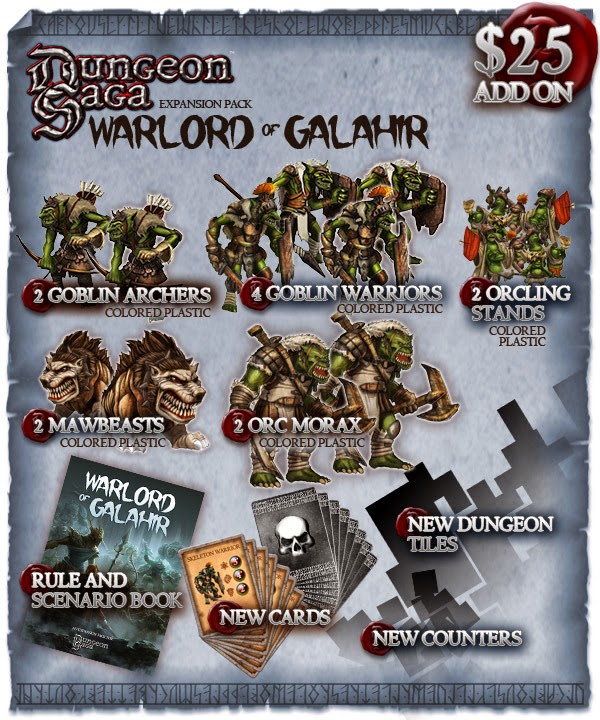 The game expansion they are showing is currently at 12 monster minis but no Heros or Villians for 25 dollars.  You get monsters that match it in the main pledge so hopefully they have at least a custom 3 player free for all mission of 1-2 heros verses a small group of undead and small group of green skins.  Some type of king of the hill mission where points are earned by controlling a specific tile for a turn.  Just a little bone for people who might not be able to pledge for the game but not the expansion so they are not getting minis that they have no use for at that point.

Mantic has done a good job keeping the stretch goal pacing such that the campaign unlocks something new about every other day or faster.  One thing I would like to see is more clarity of the nature of the card components and the number of scenarios.  Looking at some the Mantic's earlier dungeon crawl board games I was sort of disappointed to see like 6 scenarios making a game the sells at like 50-60 dollars.   Castle Ravenloft had like 13 for a game that sold often for less than 50 dollars.   A listing of the scenarios with a lower limit would be nice to help judge the games contents.

One thing is obvious about this kickstarter is that it is presale for paying for the tooling costs.  The core game is clearly past the basic design phase.  Looking at the stuff in the box set of the 29 miniatures listed as part of the boxed game only 2 are concept art.  The rest are painted prototypes.  The recently unlocked dungeon furniture is also painted prototypes which I think were visible over a week ago in one of the promo pieces.  But I still think the basic game looks a little light.  I would like to see some more monsters in it which have not been seen since just after the first few days of the kickstarter.  Not sure if you need more heros or villians (maybe a sorceress or something) but a couple more sets of monsters would be good.  Now if you want to keep it well themed the monsters should still be undead or sort of related but they are already selling an add on with KOW undead minis with most of the missing types of undead that come to mind so a little more creativity is needed. 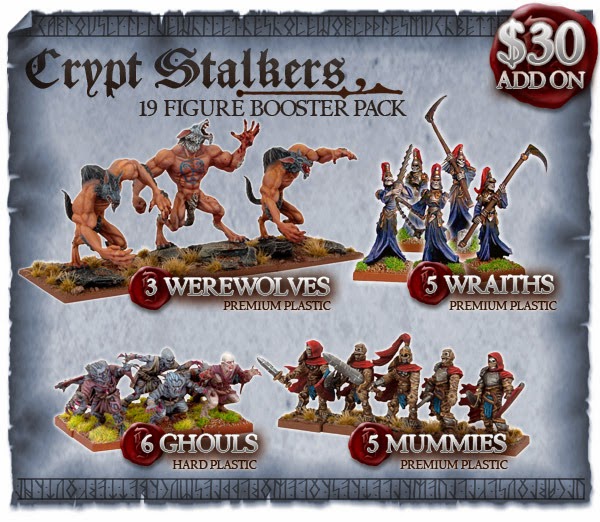 I was thinking on this and had two ideas.  One is zombie giant rats.  These could be relatively easy to kill but also has a pestilence type attack that keeps hurting heros after the rat is destroyed.  Thinking of minis I have in my collection, I have giant rats, I have skeletal war dogs but I have no zombie dire animals.  The other idea I had was giant spiders.  We know that spiders will ally themselves with certain "necromancers" and really large ones will lair in dark passages being "terrors".  Spiders can slip through small spaces you do not expect so they can seem large compared to the squares without being unreasonable.  They can also move out of holes in the ceiling not available to heros.  This sets up both a monster set and a new villain.  It also allows the addition of a web mechanic and counter which can be added to the dungeon to slow down movement in a way different from the locked doors (which should be coming in plastic for the basic game at some point).  Additions like this would add some more interesting things to the game play, not diminish the add-on sales and help out the core set value which while I pegged at 65 earlier to make exactly 100 dollars in the core pledge is still light on minis compared to games available at a similar price point.  Plus they would throw 2 extras minis in the undead add on to make it more in the basic pledge and the add on option.

The expansion currently listed is in need of its own Hero and Villian.  They have already done a fairly good job of covering all the standard D&D style heros with a dwarf fighter, human barbarian, human paladin, elf ranger, halfling thief, human wizards, and human clerics.  Leaves mainly assassins and bards but neither of those really jump out for dungeon crawls.  The Hero should certainly be a female and I think a half orc would go with the theme of the green skins.  A character rejecting the half beastly nature.   Maybe a Delver (which is a underground ranger) such that the special abilities would be different from the woodland elf ranger.  Obviously the villian also needs to be a greenskin.  I would look for an Orc brute of some sort as most of the other villians are probably getting by with magical or special powers.

So here is a nice list of those stretch goals to carry through the next week:

Ofcourse this is just wishlisting since Mantic probably already has its won plan and stretch goal map but who knows what is possible.

For disclosure purposes, I have not backed this kickstarter and am currently undecided.  I will probably not decide until the final weekend.

Update for Monday:  The next goal was revealed as Trolls for the expansion which would leave it with the same number of monsters as the base game but no villians compared to 4 and one hero (who is being used as a sweetener in the base pledge) compared to 7 which does not seem right.  They also said something that I do not like about max value for this new troll for the expansion.  Since they have not added much to the game play of the base game in a long time and seem to think they are done with the expansion it leads me to believe we will be seeing another expansion soon which I would prefer not to see.  Another expansion even if they do the same things and add bonus monsters into the base pledge provides less value to people than additional monsters in the core.  Add more to the base game such that it still appears to have a ton of value outside the kickstarter so it will not be a kickstarter only type product that is not available a year from now like so many of these things.  They have also organized the add ons to have a section labeled "Expansions"

Ofcourse they could be trying to keep the core game cheap (like 50 dollars) for which I see nothing wrong but given that they put so many heroes in it seem strange.  I see now that the dungeon dressing pieces are a bonus item and not part of the core game.
Posted by eriochrome at 1:38 AM