The final outcome is 17.3% the terminator wins, 16.7% draw, and 66.0% genestealer kills terminator. The 17.3% is just above the probability for the terminator to roll a six which is where most of his wins will come from.

Terminators also have the option to be on guard to defend themselves better in combat. Since the Terminator gets to pick whether or not to reroll his assault die after seeing the stealer roll, a decisions are required. You will of course reroll anytime you have lost the combat, but what about on a draw. If the guarding terminator is willing to accept a draw on the first die(not use his guard) then the probabilities come out to 25.2% the terminator wins, 27.6% draw, and 47.2% genestealer kills terminator. So the guarding terminator has increased both his chance to win or draw the combat by 50% compared to the original value and reduced his chance to be killed by like 30%.

Now what about those draws on the first die, when should you reroll them? If the stealer has no more action points then hold the draw. You can shoot him in your next turn with much better odds than close combat. Other than that the decision depends on what the stealer has rolled. Obviously if you both have a 6 you should probably not reroll since you cannot win. If the stealer has a 1 you should always reroll since you cannot lose(even if the stealer is out of action points). Here is a plot of the results of the combat based on where you draw the cutoff for rerolling. 0 cutoff means never rerolling in a tie while 6 means always rerolling which are both past the limits for reasonable actions. 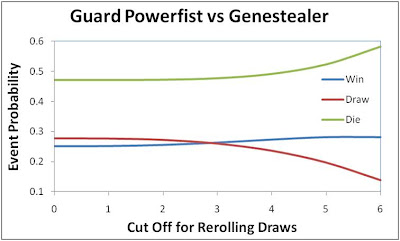 If the stealer has a 5 you need a 6 to win which is slightly worse than just a totally refresh attack without guard and since you still have guard active it is better to hold the draw in that case. With a stealer with a 2 or a 3, you have a much better chance of killing the stealer this action with a lower chance of being killed then waiting for it to attack again so reroll in these cases.

The tough call is when the stealer has a 4. This is pretty much a push since you have about the same chance of killing and dying as you do next attack but it forces the stealer to use one more action point to try to get you so I would probably hold the draw on a 4 especial for stealers low on remaining action points. So the general rule of thumb is hold draws on 4-6 and reroll on 1-3. This has a marine winning 26.3%, tying 25.9% and losing 47.7%. Only a slight improvement in killing over the willing to accept all draws but a little bonus can be helpful.

The last part of this discussion is whether you should even use guard on powerfist terminators. Given that you essentially have a better chance of killing the stealer from your first shot on overwatch with no chance of just dying and it only gets better if they have to take 2 actions to close on you. Guard does have the advantage that the only way to lose it is to get killed while if a stealer hits you in close combat you lose overwatch. I see using guard being reasonable at corners where the stealer might only make 1 step in LOS or in a room where stealers are likely to attack you from the side. I can see situations where stealers can attack from the front or the side depending on using guard or overwatch. If he can get to you either way with more than 1 action point I would probably go with guard. If you are on overwatch he will attack you from the flank such that even if his first stealer goes down your overwatch is lost so the frontal attack can then proceed.
Posted by eriochrome at 8:30 AM