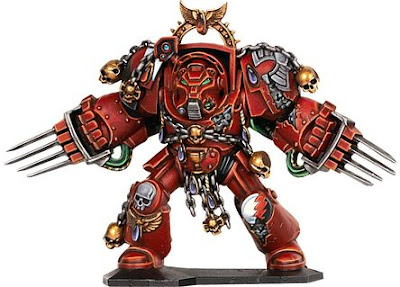 Combining these two sets results in 52.8% terminator wins, 19.2% tie, and 27.9% stealer wins. So the lightening claw terminator is twice as good as the powerfist ones in close combat.

Now if you place the lightening claw terminator on guard, how does he perform? Unlike the powerfist terminator this is no need to worry about whether to take your reroll or not. If you won you have no need of the reroll, if you lost you always take it, and if you tied you just save the tied die and reroll the other die which is lower or equal to it. This makes the lightening claw terminator on guard with 64.8% win, 18.5% tie, and 16.7% lose. This is pretty good. Essential as good as a stealer attacking a normal terminator.

Tactics for the lightening claws are all about using guard or attacking in close combat since you have no ranged weapon to go on overwatch with. Most of the time going to guard is probably the best bet unless the stealer is isolated and can get around you without killing you. If there is an isolated stealer with an exposed flank it might work out to attack him since this event is most likely to happen in a room where the stealer can avoid your close combat death dealer anyway or attack you from the flank.
Posted by eriochrome at 8:38 AM